It's been great to see birds behaving as they should be again today, and where they should be. Wading birds and wildfowl on the river, and thrushes in the fields and not in the middle of housing estates. There are still plenty of birds about though...

I've had three tours of the Estuary today and a visit to Black Hole Marsh. Most birds seen were lingerers from the last few days, except for a couple more Avocet and a two fold increase in Gadwall. My highlights were;

I was really hoping for a Bittern today, with my thinking being the increased water levels may reveal one that's been lurking in the reeds since the cold snap... If it happened I wasn't in the right place at the right time. No sign of any Ruff or the recent Spotted Redshank for me today either.

What has been so incredible about the recent cold weather movement is the number of wading birds that's been involved. Since last Thursday there has been a staggering twenty species of wading birds recorded on the Axe Estuary. To put this in perspective we usually only have nine species of waders that regularly winter on our tiny Estuary, although it's been eleven this year with singles of Greenshank and Ringed Plover bucking the trend. Twenty is usually only possible in a short space of time like this in May or September - but even in those months it doesn't happen that often. A lot of these waders are lingering too, with the Avocet flock ever building, and the Spotted Redshank, Grey Plover and Bar-tailed Godwits still here from last Wednesday/Thursday. Knot and Sanderling (four of the former, three of the latter) and a whole lot of Dunlin (193!) were the only brief visitors, being seen by new patch birder Billy on Thursday afternoon but not since (he also found the Spot Red and Barwits).

Watching the Avocets today, and having read something on the Portland Bird Obs website the other day, suddenly it clicked. Let's just think about this, why would an Avocet sat on a snowy Estuary somewhere decide that upping sticks and flying tens/hundreds of miles was the best thing to do, instead of just sitting there and waiting for the tide to drop? 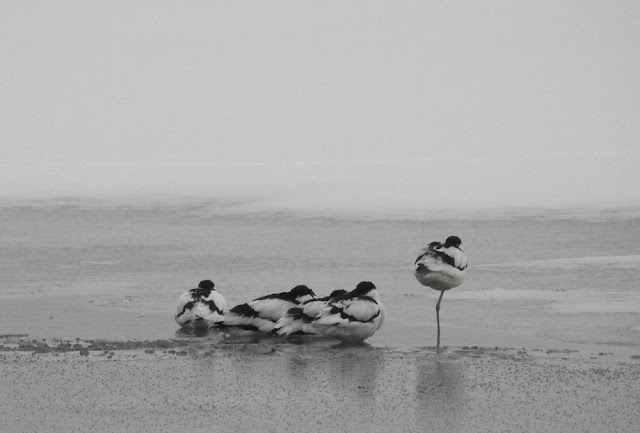 Avocets are a March species for us, no we don't usually get ten, one to four would be a more typical count. But March is clearly the month they begin to migrate back to their breeding grounds. So maybe, although for the Lapwing, Golden Plovers, thrushes and other passerines what we witnessed was undoubtedly a cold weather movement, for other species of wading birds, are we actually seeing spring passage?  We know that heavy rain showers cause migrating wading birds to drop in, so a gigantic snow front that has tracked north across the English Channel, well that's going to ground everything that's trying to fly through it right!?

Rewind to March 2013 (blog post HERE). Many early spring migrants arrived, like Sand Martins, Chiffchaffs, Little Ringed Plovers, Stone Curlew, Ospreys and Ring Ouzels, but a brisk northeast wind and freezing temperatures meant they all stalled on the south coast and went nowhere for several days.  It was so tragic to watch so many Chiffchaffs struggling to find food on pavements and in gutters, do you remember it? Well I'm wondering whether this is something similar, but as it's happened earlier in the month its not affected the species that we think of as the early spring migrants, but the true early spring migrants like waders, gulls and wildfowl?