You may remember that within my blog post that featured the ringing of a stunning Green Woodpecker at Lower Bruckland Ponds last month (see here), I mentioned that one of the four Goldcrests I caught that morning was wearing a ring with a number I didn't recognise.  Well late yesterday I'm pleased to say I got all the info back from the BTO. I must say I really applaud the BTO at how much quicker they are at getting data like this back to us ringers these days - bravo ringing HQ!

Goldcrest CPX749 was ringed on 18/10/15 at Seacroft, Skegness, Lincolnshire. No doubt ringed soon after it made first landfall to the UK after completing that treacherous flight across the North Sea. Here are the full details and a map: 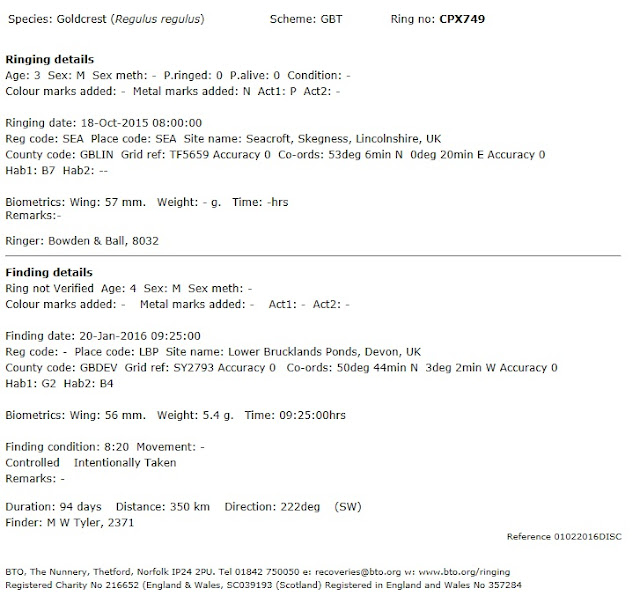 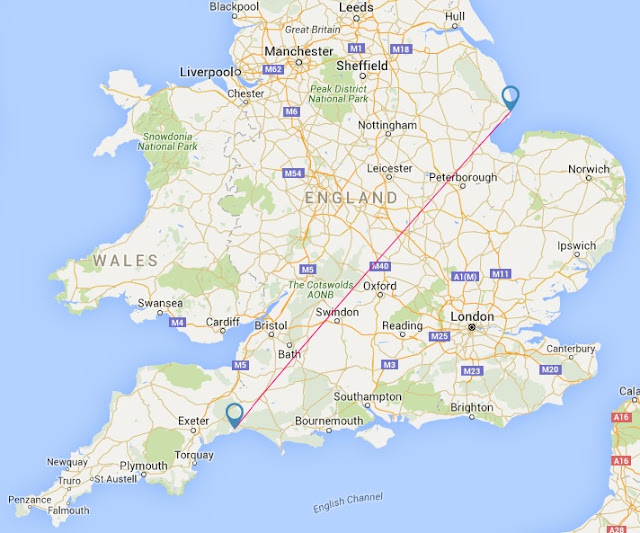 As you can see there were 94 days between ringing and recapturing, and a distance of 217 miles (350km) travelled. It wasn't weighed up at Skeggy, so I presume it was caught on a day of pretty intense ringing. A quick check on the Gibraltar Point Bird Obs website (link here), which is a bird observatory a mile or two south of Seacroft, shows that the 18th Oct 2015 was indeed a very busy day. Hope they don't mind me copying and pasting this on to my blog:

"October 18th. A new Pallas's Warbler was found during the morning at the North End along the sycamores along the northern boundary of the reserve. Other birds around, including those trapped, were a Richard's Pipit, a Yellow-browed Warbler, a Great Grey Shrike at the Wash Viewpoint in the afternoon, a Firecrest (East Dunes), a Grey Wagtail, a Redstart, an adult Caspian Gull (on the beach in the morning), a Short-eared Owl, a Marsh Harrier, 2 Merlin, a Kingfisher, a Treecreeper and a late Grasshopper Warbler. On the Mere were a Jack Snipe and a Water Rail, and on Tennyson's Sands another Water Rail. Flying south were 24 Siskin.At Aylmer Avenue another 600 Redwing moved south and west during the morning along with 30 Fieldfare, 20 Song Thrush, 30 Blackbird, 10 Brambling, 8 Siskin and 6 Lesser Redpoll. There were 300+ Goldcrest around through the morning before they quickly moving on south. Interestingly none of the 194 Goldcrests ringed yesterday at Aylmer was retrapped today, amply demonstrating the rapid turnover of birds through the reserve when we have north-easterlies.A morning ringing session in East Dunes, with James Siddle, provided 93 new birds: 36 Goldcrest, 3 Wren, 11 Robin, 5 Blackcap, 8 Goldfinch, a Grasshopper Warbler, a Reed Bunting, 4 Lesser Redpoll, 8 Song Thrush, 10 Redwing and 6 Blackbird; and 8 retraps: 2 Robin, 3 Goldcrest, a Blackcap, a Dunnock and a Goldfinch.

A longer ringing session at Aylmer Avenue by Mick Briggs and David Vincent, who were assisted in the morning by Neil Hagley of the Charnwood Ringing Group (Many Thanks, Neil), resulted in 241 new birds and 18 retraps.The new birds were 138 Goldcrest, 48 Redwing, 19 Robin, 11 Song Thrush, 7 Blackbird, 5 Blackcap, 3 Fieldfare, 3 Greenfinch, 2 Wren, 2 Brambling, a Reed Bunting, a Dunnock and a Chiffchaff. The retraps were 9 Greenfinch, 2 Robin, 2 Dunnock, 2 Blue Tit, a Goldcrest, a Blackbird and a Chaffinch.  Ringing during October so far has resulted in 2333 new birds ringed - the best monthly total since October 2012. There have been an amazing 1266 new Goldcrests."


So although not a surprising movement for a migrant Goldcrest, for me it's so special, as it is for the Ponds. And with so many Goldcrests ringed on the east coast during the autumn of 2015, its another recovery that helps paint the picture of how they then spread out to spend the winter across the UK and Western Europe.