Getting Back To It

First of all, I have to say thank you so much for all the comments, emails, texts and tweets in response to my previous post. I do have more to say, but I'm not going to. It's time to draw a line under it...

...and get back to what this blog is about.

We have been blessed with flat calm seas for a few days, and decent cloud cover making conditions ideal for sea scanning. Bird wise though there has been very little on the sea, with species you'd expect to see several of (Great Crested Grebe, Common Scoter, Cormorant, Shag) few and far between, or totally absent.  Thankfully though the last few days have seen a bit of quality appear!

I haven't seen Long-tailed Duck here for six years, and before that I'm pretty sure I've seen just one other. So you can imagine my thrill when I picked up two feeding in the bay off the Spot On Kiosk yesterday morning. Both are immature/female-types, but beyond that I've never been too confident at ageing/sexing distant non-adult male LTD's. One was considerably whiter than the other - and if I had to place bets I'd say they were both female's, and ad and an imm. Most pleasing is that they seem settled, and are still out there feeding this morning.  Also yesterday a drake Red-breasted Merganser flew around the bay for a while which was nice, as was my first settled Great Northern Diver of this winter.

This morning I gave Branscombe its second look of the week, and had two more settled Great Northern Divers, along with a fly by Red-throat.  There were way more Kittiwakes and auks off here than in Seaton Bay, so hopefully regular visits here will turn something up.  A snoop around the sewage works here earlier in the week showed four Chiffchaffs and good numbers of the expected species - sadly no Yellow-browed or Dusky.

Tuesday morning I undertook my usual woodland bird survey near Colyton. Nice to see my first four Woodcock of the winter, along with a couple of Fieldfare, 10 Redwing and a fly over Golden Plover. All very wintry!

There is a very winter feel to the birding scene now, vis mig appears to have all but stopped and the hopes of a late autumn rarity seem far flung.  Before it did end I gave Beer Head probably it's last visit of the year, on the 15th.  It was nice to see a few Wood Pigeons flying over NE, only 1350, but it was my biggest passage of the year (which is terrible!). 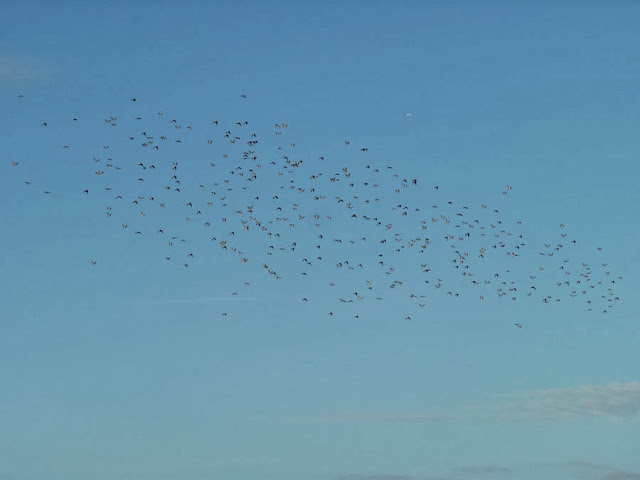 On the ground, four Song Thrush, three Redwing and a Chiffchaff were expected, but a late Wheatear not so...

So there you have it, autumn 2013 done.  And now we are into the last phase of the year - the last phase of my year listing year.  Long-tailed Duck was my 188th species for the year, which is a notable number as its the first guess from Steve's 2013 Patch Year Listing Competition.  Here's a reminder of who guessed what I'd end the year on...

So Andrew, if the year was to end now, you would be the winner. But I'm afraid it doesn't, and I'm sure there's at least a few more year ticks in it...