This is going to be a very duck orientated post, as pretty much everything I've seen that's notable has been a form of wildfowl!!

We are a week into Novemember, and I am at 185 for the patch year list. I'm going to have to be honest now and say I think 200 this year is impossible. There's only been 190 species recorded by everyone on patch so far in 2013, so I reckon even if I saw 100% of all the species seen on patch by the end of the year then I still wouldn't be at 200! Oh well. I can't wait to see who wins the competition though - I won't stop trying!

On the last day of October I was on 184, so what was number 185?  On Monday morning, a look along the Estuary was made a lot better when I picked up a Pochard flying up, and then back down the valley north of Coronation Corner. It appeared to land on the river somewhere around Colyford Marsh, but a look from the Farm Gate afterwards failed to locate it.  Pochard has become a great rarity here, and this was the first record for the patch in about two years!!

Just before the Pochard excitement, a sea watch revealed almost as much excitement with three Velvet Scoters. First of all, two flew in from the east and landed distantly off Beer. Then just a few minutes later I picked up another one, on its own, flying west far out.  I love Velvet Scoters so was well happy with these, and it certainly made up for the lack of anything else on the move at sea.

Going back to the end of the previous week, I had a female Pintail and drake Shoveler on the morning of the 1st. These were on the Estuary along with the lingering Curlew Sandpiper (which I last saw on Monday 4th) and Ruff. The Spotted Redshank is still knocking around too.

Back to the sea, and on Tuesday morning a Red-breasted Merganser and two Brent Geese were the highlights. With a look at Lower Bruckland Ponds showing the continued presence of the two Tufted Ducks. A nice surprise were calling Bearded Tits from the Farm Gate, I didn't see them though so have no idea how many or where exactly they were!! Possibly the same birds that Fraser found on Black Hole Marsh last month?

A seawatch yesterday morning didn't show any wildfowl of note, but it did show plenty of Kittiwakes! Sadly though variety was lacking - and I still haven't seen a 2013 patch Little Gull!

Then there's today. All was quiet, then this thing flew in and joined the local Shelduck... (apologies for the poor photos - it was very distant) 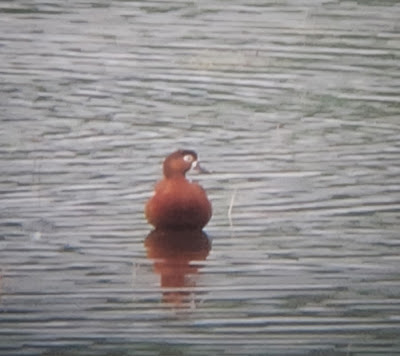 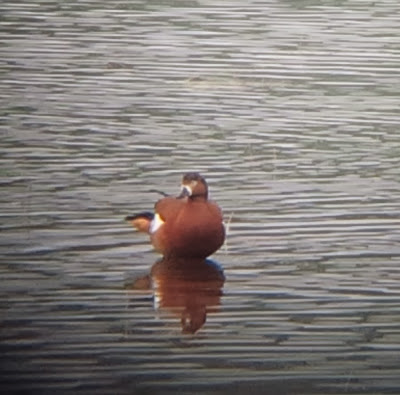 I knew it wasn't Ruddy, Cape or Australian Shelduck, but whatever it was it was STUNNING! Really gorgeous deep velvety red, and in flight it looked superb with flashes of bright white!

The nearest I can find online is this http://www.flickr.com/groups/hybridbirds/discuss/72157601886415063/ which is a CommonxRuddy Shelduck hybrid. A new one for me!

Steering this post away from the duck-theme, I've just heard a few Crossbills calling from the back garden. Sadly I couldn't see them but they were flying west.
Posted by Steve Waite at 14:32