Isn't it funny how powerful sounds are at bringing back memories.  I was lying in bed this morning at about 6:30 with the window open, and could hear the distant calls of Curlew. I was instantly transported back to when I was about 16, and the few days Dad took me up to mid Wales in late spring. Where we stayed, we could hear Curlew bubbling away on the nearby moors from our beds - I felt like I'd gone back there this morning, briefly.  Aren't our brains weird - well mine is anyway!

OK, now to today. And although we haven't got snow and ice, I was hoping the fact that other parts of Britain did meant I was in for a few birds. To be honest I didn't see much different, but I did notch up a very useful patch tick.

I was down the beach for sun rise this morning. Here's the proof...

And I soon had the golden moment, when I picked up a cracking drake Goldeneye sat on the sea, close in amongst the groups of Black-headed Gulls still present from roost.  It didn't stay long though, just as I sent the text out to say it was there, I had to start writing a second text as it had taken off and was flying off east.  Dead pleased with this one though - you can easily go a year without seeing one of these on patch.

There was a tiny bit of variety during this sea watch, and some numbers - especially Black-headed Gulls with several hundred noted flying west in flocks numbering between five and 80.  Apart from the gulls, this is how my note book looked:

Sadly I haven't seen much else today, although I've finally seen non-Mallard ducks at Lower Bruckland Ponds this winter! Sadly they were just two Teal though, and not any of the diving ducks I'm after. The vocal Cetti's Warbler was still here.

Yesterday Jess and I embarked on another five mile walk around the patch.  This time we left home, walked down in to town, up over Axe Cliff Golf Course, around the back lanes of Axmouth almost to Rousdon, then over the A3052 and down to Lower Bruckland Ponds. This is where, thankfully, I had earlier left my car!  The weather was glorious... 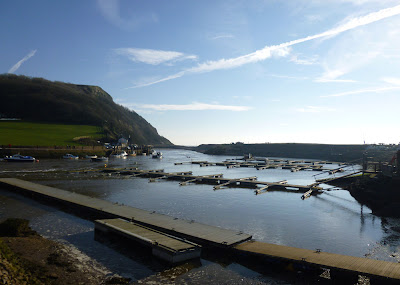 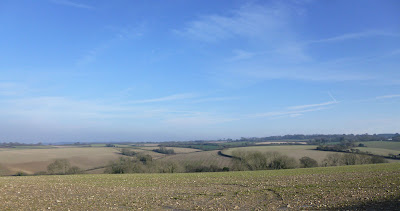 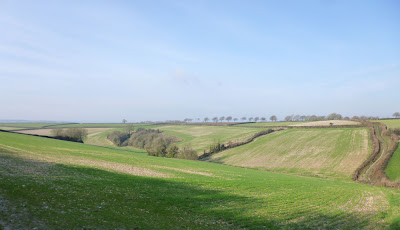 Not many birds though, except for a few flock of Skylarks and Chaffinches in the Axmouth fields. I've still not seen Stock Dove or Red-legged Partridge this year!

Walking down to town, it was nice to see a small number of Wigeon and Teal in the south west corner of the Axe wetlands...


Maybe this is where our Green-winged Teal has been hiding!? It wasn't there yesterday but I'll certainly be checking this area out a few more times before the winter's out...
Posted by Steve Waite at 14:06