Over the last few days I have noticed a high proportion of Black-backed Gulls on the river - this is always an obvious sign that there's some decent gull passage going on.  There wasn't anything of note amonsgt them yesterday, but a look along the Estuary late morning today revealed this amongst the 92 Lesser Black-backed Gulls... 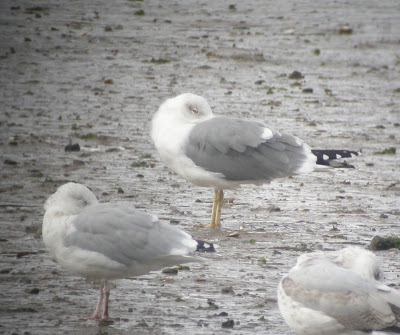 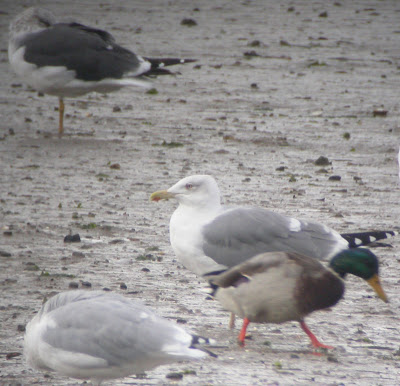 A cracking near-adult Yellow-legged Gull!  I say near-adult due to its relative dullish bill and legs, and streaking around the eye - I may be wrong though!

The middle photo shows a nice comparison of mantle colours, with Lesser Black-backed Gull at the back, Yellow-legged Gull in the middle and argenteus Herring Gull at the front.  This photos also shows the typical square-headed appearance of Yellow-legged Gull.  The lower photo (although slightly fuzzy) shows just how long-winged it looked in the field.

The count of Lesser Black-backed Gulls was notable in itself really, with all ages and many different mantle colours on show.  Although I counted 92, in reality today well over a hundred I'm sure would have visited the Estuary.  There were lots of Great Black-backs too, but I didn't count these (at a guess c160).

Wader wise, both the Bar-tailed Godwit and Greenshank were still on the river, with the two two's still opposite Axmouth FC (two Wood Sands and two Ruff).