Keep On Top Of It

Well I am going to try and keep on top of my blog posts from now on - instead of giving you a once a week update! Many apologies for this latest trend.

I have had, and still have (and probably will always have!) a lot of County Recorder computer work to do, and it has prevented me from getting out and doing what I love doing anywhere near as much as I would like too. This morning, wandering around a beautiful and very autumnal Beer Head was so enjoyable - even though I didn't really see anything of note! And it made me realise that birding isn't just something I love and enjoy - it is something I MUST do. However busy I am. When I spend days upon days on my laptop (which I have been doing) I end up getting headaches, writing total garbage and going a bit doolally - so it's time to break it up a bit! Don't worry - your County Recorder is not going on strike - I'm just going to always give myself a few hours at the start of every day to do what just HAS to be done! :-)

Ok, so what about Beer Head. Well I said it looked beautiful this morning, and you have to admit I'm not wrong... 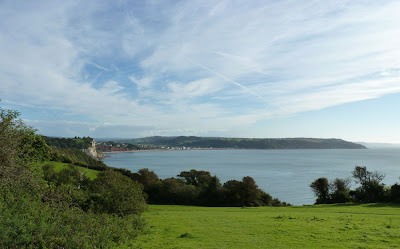 Looking back in to Seaton Bay
To be honest, I was expecting more grounded migrants than I saw, because there was a brisk W/NW wind blowing under the clear sky. Six Blackcaps, three Wheatear, three Willow Warblers, two Whitethroat, two Spot Flies, one Sedge Warbler, one Garden Warbler and one Chiffchaff were all I managed though.

Melodious Warbler really has to be on the cards up here - we've had two probables that have both got away. Whilst on the subject of Melodious Warblers, I really don't understand how an island off the NW coast of Wales (Bardsey) is currently home to their 114th Melodious! It really is worth clicking on the link by the way to see some stunning photos of hippolais warblers.

Anyway, back to Beer Head this morning, and overhead there was a bit more action. Lots of hirundines were moving west (mostly House Martins), along with several small groups of Meadow Pipits (the sight and sound of the start of the autumn vis mig!), seven Grey, three alba and two Yellow Wagtails.

Lastly, after I posted about my 71 Balearics yesterday, I had a couple of texts which added another 16 birds on, which gives us a day total of 87 Balearics. There were about seven daylight hours though when the sea wasn't being watched - so the true total must be well over 100. Thanks Ian and (Midlands) Mike for the texts.
Posted by Steve Waite at 15:37