Well actually there is very little to update people on!

I have been out birding a couple of times though over the last couple of days, which makes a nice change - but I haven't seen anything worthy of mention.

I had a net up in the front garden this morning again, and have now ringed a total of 19 Bullfinches. I caught a twentyith bird too, but had to release it without ringing as it had a nasty case of 'Bumblefoot'. It's the first time I've seen this virus on a bird other than a Chaffinch.

Bullfinches are very easy to age (unlike some of their Green cousins!). We all know what a juvenile looks like... 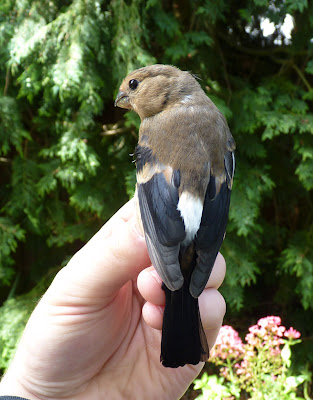 Big obvious pointer being no black cap!
And this is the wing of a second calander year female (aged 5 - born last year)... 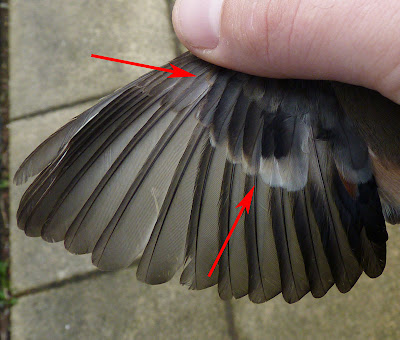 Left arrow is pointing at a browny-buff edged primary covert (much whiter in older birds) and the right arrow is pointing at the step in the secondaries, with the four to the left of the arrow tip being first generation feathers (it would have grown these in the nest last year) and second generation feathers to the right (these would have been moulted in last autumn).
Hopefully I will have a wing of an adult female Bullfinch to post soon - just to complete the comparison. I have actually got one, but my finger is right over the primary coverts, so it would be pretty pointless posting it!
Despite the rain and force 100 SW wind on Friday night, I put the moth trap out to continue my recording for the Garden Moth Scheme. I wasn't expecting anything, so 36 moths of 7 species came as a bit of a surprise, although there weren't any surprises in amongst them...