Colyford Platform this afternoon looking east
Have to say, it is certainly one of the better 'old folk lore tales', as shortly after taking these photos it started to rain!

Birding over the last two days here has been hard work! There SHOULD be so much more about!!!! Arrrrggggghhhhhh!!!

Yesterday a walk through Blackhole and Colyford Marsh produced nothing better than a Barwit and... 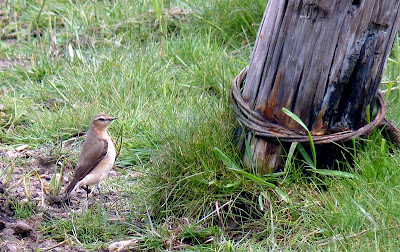 This Wheatear on Colyford Common and another on Blackhole
I tried a sea watch mid afternoon as the wind picked up and skies darkened. It was very disappointing though with just a single Great Norther Diver, nine Manxies and six Kittiwakes noted.

Today has seen a little improvement, but only a little! Best of all today was the action over Blackhole Marsh late afternoon; 400 Swallows, 40 House Martins and 20 Sand Martins were impressive, but not half as impressive as the incredible arrival of Swifts. I have only seen small numbers of Swifts so far this year, but as a rain shower came in mid afternoon at least 350 appeared in the skies over the valley, some feeding very low over Blackhole...
A Yellow Wag appeared briefly on the wires amongst the madness of the hirundines, and waders I've seen today include one Greenshank, six Dunlin and 14 Whimbrel...

...which included these seven that flew high NW over Colyford Common without even giving our Estuary a glance!
Last night I had both moth traps in the back garden hoping for a good catch...well it couldn't have been any worse than the night before when I caught only two Hebrew Characters! This morning I had 14 moths of 8 species. There were no new species for the garden, but it was fantastic to trap my first immigrant of the year... 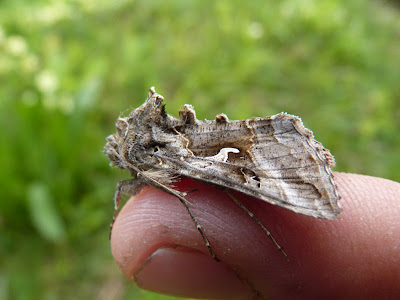 The Prominents are one of my favourite bunch of moths, so I'll finish this post with the two I had today...