Before today, Leach's Petrel was certainly my most dubious tick on my local patch life list. That's because my only Leach's Petrel on patch was this one.... 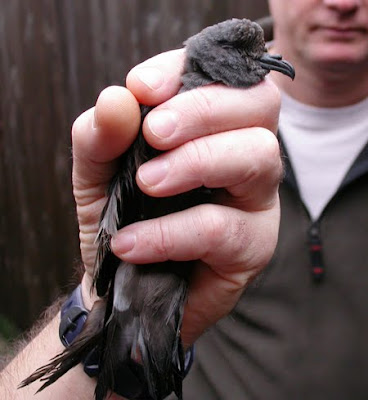 Looking well.....!?!
Well there's no doubting its ID! And it is alive, despite having its eyes shut in this photo! This bird was caught by a cat a few miles inland (still on patch) and brought along to Seaton hide in a box on a Meet The Birds morning. That's where I saw it! Sadly this following day he/she passed away...

But these events need no longer nag my listing conscious.... : )

This morning, Chesil Cove birders witnessed the most amazing wreck of Leach's Petrels. Wow - the stories I've heard sound awesome, I so wish I was there. Thanks to Brett for keeping me updated with the days happenings.

I've been tied up most of today (not literally I must add!), and missed a couple of Leach's Petrels off Beer early afternoon; I was especially gripped by Buns as it sounds like it passed rather close.

Anyway, at 14:45 I was free....and headed straight for Seaton Hole. I settled myself at the top of the cliff to give me some height advantage. The winds had eased quite considerably from earlier in the day, but I felt this was a help, as it meant the waves had decreased in size. Half an hour had past and next to nothing was in my notebook... I felt a change in tactic was due....

I went from 20X zoom, to 40X and started grilling a slightly more distant bit of sea. Within a few minutes a Leach's Petrel came into view, and I watched it for a good few minutes as it made its way west. I lost it for a few minutes but re-located it again and watched it for another five minutes as it continued west. Within the next ten minutes, I saw another two fly west at similar distance. A fourth bird flew west at 15:50, but this one was a little more distant. Result!!

So now I think I know why we haven't really been seeing Leach's...they are simply passing too far out! If the light hadn't been so good, and the waves how they were, then I would have struggled to see any of the four this afternoon.

Too be honest, despite the passion I have for patch birding, and seeing birds on patch, I would have swapped my four for a few hours at Chesil Cove today.....it sounded INCREDIBLE!