No, not a Great Bustard, but a juv Yellow-legged Gull! I came across it during a high tide sweep of the estuary at 11am

As juv Yellow-legged Gulls go, it's a very dark headed individual (in my eyes anyway), but all the features are there. Some good flight views confirmed it all, dark inner primaries and brilliant white tail with a tidy black band. It was a hefty bird too and noticeably thick-billed. 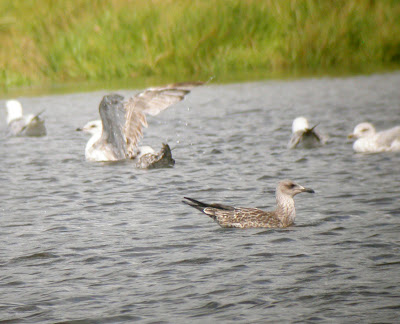 Note the all black tertails with narrow white tips, no obvious notching; long-winged too 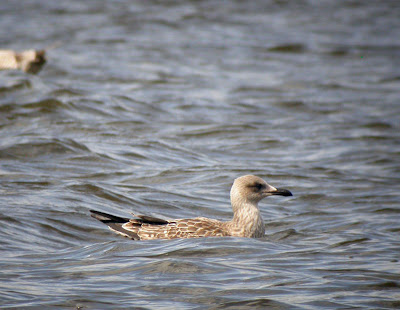 Note the small white patch at base of bill 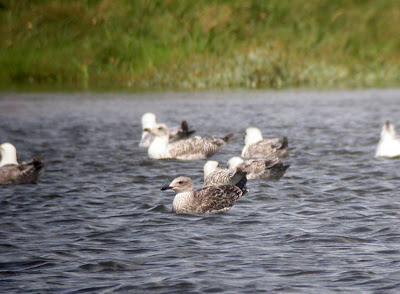 Big boy!!
I guess the fact it is quite dark headed may indicate that it is very VERY young, even younger than the usual pale-headed juvs that we're are used to seeing? Gav and Karen came for a look, making this a local patch twitch!
After all the Gulls flew off north thanks to a small boat, Gav and myself went over to Blackhole Marsh. At least nine Green and four Common Sands and a Blackwit were the best of the selection on this wonderful bit of habbo.
Now to Moths! I put the trap out last night but wasn't expecting much as rain was set in for the whole night. I was right, only caught 30 species and no new for the gardens.

I have still added a species to the garden list though today, thanks to the reappearance of the Carpet sp. which flew away from me a few days ago before I could ID or photograph it. I disturbed it today near to where it disappeared on Saturday - in the conservatory! It's this... 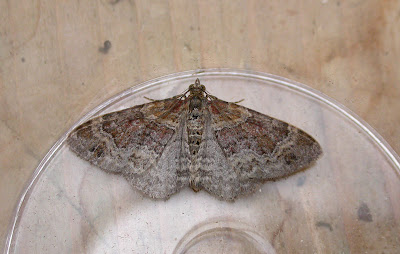 A Red Twin-spot Carpet
Won't be putting any traps out tonight, but may do tomorrow night depending on the weather. Stay tuned...
Posted by Steve Waite at 15:57