Just a couple of snippets of interest from the past few days to tell in today's blog post
Friday morning last week saw a slight surprise in the form of a Ringed Plover on Seaton beach. This was probably our first true sign of spring passage as there's not been a Ringed Plover on patch since October 2016. With the temperatures turning mild later this week I wonder if any other signs of spring will emerge?
On Thursday of last week it was nice to see two good-looking tristis Chiffchaffs at Colyford WTW.  The first bird was ringed (presumably the bird ringed here by Mike Tyler on 28th Dec 2016) and came straight in to a recording of tristis song. The second bird was along the lane just north of the WTW, and looked even smarter than the ringed bird with proper 'Daz white' underparts, but it never called. Sadly neither posed well enough for photos, but if they stick around some more hopefully I'll get some shots.

It's been great to see far more Med Gulls about recently. In the first winter period they were so scarce here, but in the last few weeks I've been seeing ones and twos far more frequently. Adults in all stages of head moult and a couple of second-winters too, probably over ten different birds in the last two weeks, including sadly one with a damaged wing by the tram sheds.

The only bits of interest from today include the wintering Grey Plover still on the Estuary, a drake Gadwall for its second day hanging out below the Tower Hide, and the Brent Goose that has been around since Saturday on Colyford Marsh.

I hate posting photo-less posts, so have a token Kestrel from mid January.  There seems to be a few more of these about than the last few years, with at least five wintering on patch... 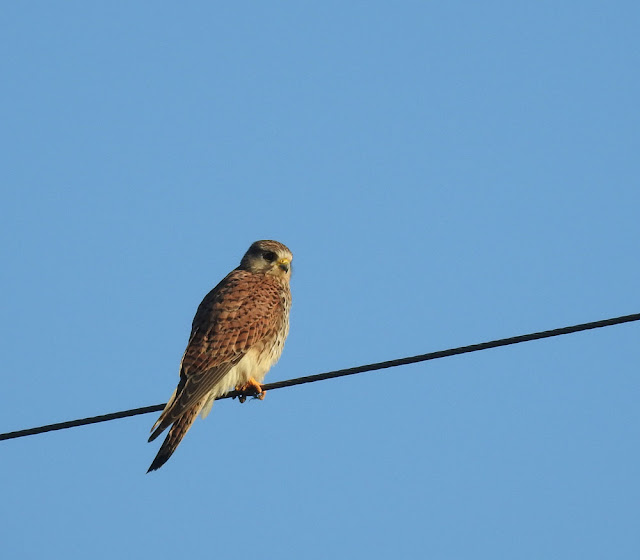