New Bird For The Patch

Well it all went a bit mad here yesterday!!

What was thought to be a Spotted Crake was seen yesterday morning from the Island Hide at Black Hole Marsh. For some stupid reason I decided not to go and see it as I have so much to do at the moment and we were treated to superb views of this species here last year.  Thankfully though Black Hole Supremo Sue Smith did, and on seeing it thought something wasn't quite right - pale stripes on the birds back, a pale face and front and she also thought the whole birds shape look wrong.

It wasn't until it was approaching late morning that noises came out this bird may not be a Spotted Crake, at which point I shot down there. Sue, Phil and a few other were there, and we were soon joined by Dave H. There was no sign. Something that was there though was Sue's camera, and she showed us this distant photo (the conditions were dull and foggy when she took it)....

Sue was right - this was no Spotted Crake!!!!! Although not a clear shot, it does show a delicately shaped crake/rail with a pale breast and rich brown coloured upperparts. Well either that or a Reed Warbler!

I could only give it until midday then had to come away, still no sign.  Thankfully though Dave H sat it out, and whist munching on his BLT at about twenty past one there it was! And in exactly the same place it was seen this morning.  30 minutes later I was back down there and soon enough this beautiful bird appeared and performed really well for ten minutes, before I had to prematurely leave it for work. I love Crakes - they just look so rare. I don't love how elusive they can be though. Yesterday it showed well until about 15:25, but then was only seen for a ten minute spell from 18:00 and that was it. It is still there this morning though.

I'm pleased to say that all patch birders have seen it now (unlike that wretched Cuckoo!), even Gav dusted off the bins to add this bird to his patch list. Nice to see you again Gavo.  Hopefully Sue will put some of her photos from the afternoon views of the Crake on her blog, as she got some good ones in the end.  Long lense Tim got a few pics too, he's uploaded one on to his blog.

For those who have not seen it yet, I hope this helps... 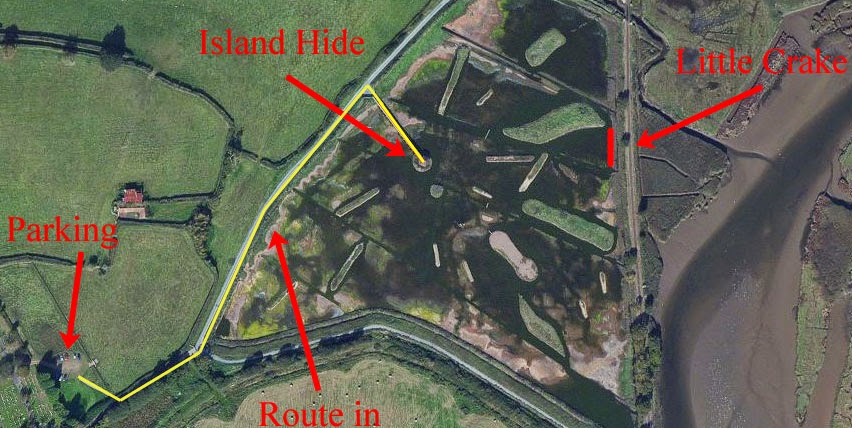 Hopefully will be able to blog again later today or this weekend, with details on a Wednesday morning Beer Head visit.
Posted by Steve Waite at 10:58