Since the last post I have managed two short ringing sessions on Beer Head, one with Peter on Wednesday 3rd and a couple of hours by myself on Monday 8th.

On the 3rd 28 birds were trapped and ringed, with 26 of these being 'new' birds. No stand out species, but it was mostly about Sylvia Warblers with ten new Blackcaps and three Whitethroats trapped, along with two already ringed Blackcaps.  The Blackcap re-captures were interesting as it shows I'm catching local breeding birds and not just passing migrants, with one of them being a male I ringed here back in May, and the other a young bird I first caught as a 3J (which means still in juvenile plumage - so almost certainly hatched on Beer Head) in the middle of August.

I will do on a post on Blackcap ageing one day in far more detail, but here's three head shots all showing first-year male Blackcaps, and the various extent of brown on the cap. The top bird had completed it's post juvenile moult, the middle and bottom birds were still in the process of their PJ moult, but they will probably retain some of those brown cap feathers even after their moult has finished.

Other birds ringed included singles of Chiffchaff, Willow Warbler and Goldcrest (the second ringed of the autumn), and a nice trio of Long-tailed Tits - my first ringed at this site.

In my last ringing related post I mentioned about the partial post juvenile moult in passerines, and that some species actually complete a full moult in their first autumn - replacing all their flight and tail feathers. Well Long-tailed Tit is one of those species, but all three of our birds could still be aged as first-year birds (3's) as they hadn't completed their moult yet. 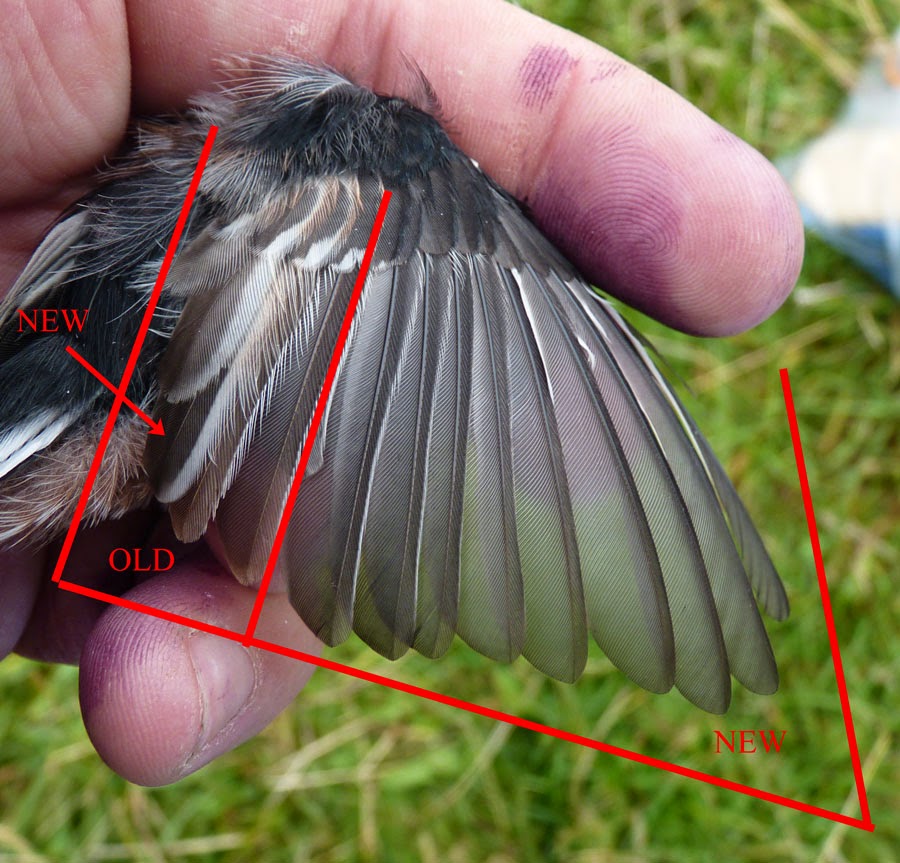 They had replaced all of their primaries, although the last couple we still growing, but were only part the way through their tertial, secondary and greater covert moult. The browner and more worn juvenile feathers are pretty obvious to see, but hopefully the red lines will help. You can see a half grown secondary feather along the middle red line and the arrow is pointing to the replaced adult tertial feather. Compare the condition of replaced tertial with the older juvenile one above it - the old one has little nicks at the tip and along the edge of the feather, this is natural feather wear and a brand new feather wouldn't show this. If I was to catch these birds in maybe a week/ten days time I'm pretty sure they would have completed their moult, and would be aged as '2's' on plumage (the age code for haven't a clue - could have been born in any year).


Yesterday I caught just ten birds, but eight of these were migrants so I was still happy; three Blackcaps, three Willow Warblers and two Chiffchaffs.

I've been up Beer Head again this morning, but only for a quick dog walk.  There was a real late autumn feel to it, with crisp blue skies, a chill in the air, and heaps of Meadow Pipits flying about.  Also saw ten Wheatear, three Grey and two Yellow Wags, five Blackcap, three Whitethroat and a handful of Chiffchaffs. Sadly no Wrynecks.