The Wait Is Over

Sleep much? No I didn't think so, just tooooo excited about seeing the answer to yesterday's quiz.

Karen - I am pleased to say you have found the stonking pale juvenile Yellow-legged Gull.

Now the funny thing is, when I took the photo I thought that was the only Yellow-legged Gull in the frame, but it wasn't! The darker and larger juvenile had sneaked in to the bottom right hand corner!


Here's the promised slightly better photo of the paler bird... 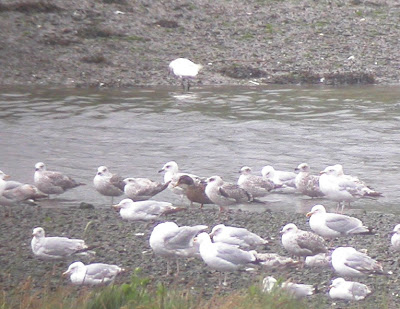 Just to the right of that Mallard

From the angle of this photo it's hard to make out the pristine fresh juvenile wing feathers, so you may mistake it for a first-summer bird in this pic. Anyway, did you get it right? Did you care!?

Four Balearic Shearwaters flew west within a five minute period from 06:30; two together then two singletons. Other than that I noted the following: 17 Common Scoters (8E, 3W and 6 on sea), 48 Gannets, 54 Manxies (4 east), 6 Sandwich Terns, 2 Kittiwakes and 2 auk sp. A very brief possible Storm Petrel was incredibly annoying!

Lastly there's a couple of Gull-related things I accidently left out of yesterday's post. An adult Common Gull at Colyford Marsh, and a white colour-ringed Herring Gull at Seaton Hole. I will post details of it on here when I hear back.