Find your own Caspian Gull with minimal effort... catchy right!?

Last week Gav over on NQS published a post titled Caspian Gulls in the Southwest.  A great post which was well received across the board, his natural and witty writing style hitting all the right notes as ever.  But there's a few points I want to touch on, as well as a little project I'm excited to announce...

Like Gav I bloody love Caspian Gulls. I love to see them, find them, write about them, analyse them - the full works.  They just add another dimension to birding, especially in the dull damp and dire winter months, and down here in Devon it can get really dull damp and dire believe me!

Personally I think there are some really interesting questions to be asked about Caspian Gulls and in particular their distribution/occurrence in the south west, such as...

3/  How rare are they actually in this part of the world?

Regarding point one and two, a key factor here is why do so few people find Caspian Gulls?   Well the obvious explanation is that many birders just don't look at large gulls...  but I know this isn't the case.

Just look at white-winged gull records, most birders have had their find share of Iceland and Glaucous Gulls, but is that because they basically look like Snowy Owls? Well not wanting to sound in any way patronising, but yes I think it is.

If you are not passionate/interested/bothered about gulls, then why would you spend an hour going through a load of grey and brown feathers?  Probably in the rain, and probably after you've failed to see any 'proper birds' which is why you are now looking at gulls!

However my counter argument to this is that a pristine young Caspian Gull is as obvious as a white-winged gull.  Six of my eleven Casp finds were through my binoculars not my scope, another one was with my naked eyes. In fact for two of them I didn't even have a telescope with me - not recommended though I do not promote this!

So I am going to try something new, in an attempt to open more eyes to the world of Larus cachinnans. I will endeavour to bridge that gap between the 'gull-unenthused' and Caspian Gulls...  But how I hear you ask?

Well we've all seen the blog posts with simple text, big bold headings and photos of one or more Caspian Gulls with red arrows and uneven circles graffitied all over it. I have posted many of these myself, but to be frank they're not working. What I'm planning is different, very very different...

The title will be 'Find you own Caspian Gull with minimal effort' and the emphasis will be not on the finer ID points, where the median coverts are, or where to draw the line between a rough Casp and a CaspxHerring hybrid. It will simply be - in the absolute easiest to digest and 'apply in the field' format - whether a 'tick all the boxes' classic young Caspian Gull is in the flock of gulls in front of you.  I am not interested in the duffers, the 'german muck' or older birds that are far less regular in this neck of the woods. Of course they interest me personally, but I really do get why they probably wouldn't interest many birders.

OK Steve I hear you ask, where is this fantastic new game changer of an ID paper? Let's see it! We want it now!

Well you'll have to wait I'm afraid, and here's why...

On my laptop I have a Caspian Gull database - sad aren't I!? And thanks to the speedy and sharing nature of the Cornwall, Dorset and Somerset County Recorders, last week the database went from being an Axe and Devon Casp database, to an Axe and the south west Casp database! And from this database, with just a few clicks of the mouse I was able to produce this... 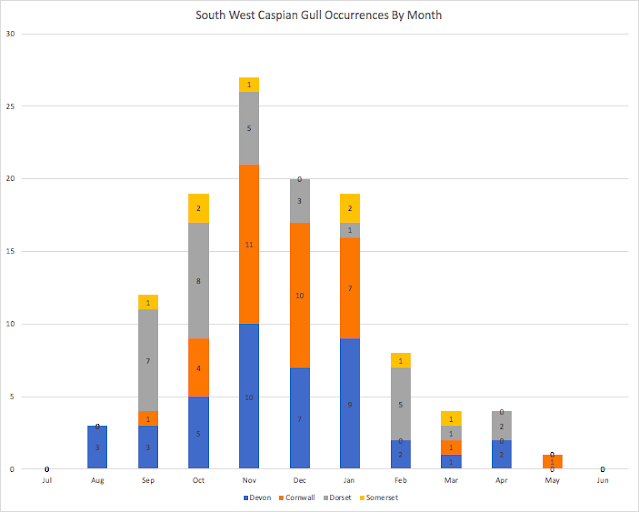 As the chart title suggests this is the monthly distribution of all south west Caspian Gull records.  I've laid the graph out July to June to show the trend better, as both July and June are blank months with zero Casp records. This is all accepted Caspian Gull records in the four counties in the south west, along with 2020/2021 yet to be accepted (but photographed and looking good) Devon Casp records.

As you can see we are just coming out of peak Caspian Gull season in the south west, so there would be less value in publishing anything just yet.  I want maximum impact and maximum results.  So mid autumn 2021, be ready to ready yourself to find your very own Caspian Gull! And who doesn't like to find a rare bird!?  And they are rare, just consider this...

I reckon over the course of the year - well a normal year - I probably look along the river on average five time a week.  This was really hard to work out, because in foul weather I can look along the Estuary four times in one day, but then in May/June I don't look along it as often as I should, plus throw into the mix busy periods at work.

Any Axe birder will tell you how large gull numbers vary here, sometimes there are disappointedly few (occasionally none at all!) but on another day there can be over 800 present! However if I had to give a rough guesstimates I'd say on average you see 150 large gulls on the Estuary. By large gulls I mean Herring, Great Black-backed and Lesser Black-backed Gulls.

So this means over the course of the year on the Axe I (very) roughly look at 39,000 large gulls, which is 260 days x 150 gulls. That is not 39,000 different individual gulls, as am sure we see many of the same birds day after day, and colour-rings have proved this to some extent, but it's essentially 39,000 gulls checked a year....ish!

I really do think once you've found a Caspian Gull, it will not only prove a light bulb moment but it will create a spark, a new excitement for a genus that maybe in the past has only ever made you want to smash up your scope, burn the books and hide in a cave.  Maybe it will even make you want to find more?

And let me close this already far too wordy post with a tale of an email I received from one of the Dawlish Warren regulars back in April 2014. This email included a photo of a half obscured large gull that had refused to show the observer most of the vital parts (underwing and tail if I remember rightly).  It was a Caspian Gull, a cracking first-summer bird and the Warren's first.  Seven years later and Dawlish Warren is the second best site in Devon for Casps, and fourth best in the south west.  I'd like to think that back on 6th April 2014 that Casp was the catalyst, the starting point of a learning curve and quest for more, just like my first Casp was for me back in 2007.

As I said earlier, they are still a rare bird, and who doesn't like to find a rare bird?