I can't ever recall seeing a double-figured flock of Pintail here, so when a single juv/female that flew up river past Tower Hide double-backed round to tag on to a flock of nine flying north, I was a bit surprised to say the least!   The ten spent about five minutes flying around before appearing to drop down near Bridge Marsh.  A look here about twenty minutes later revealed just one Pintail (with Clive later seeing nine which makes sense!) along with three imm Shoveler and about 100+ Teal.

I had another look around mid afternoon, when the sun decided to come out for a bit.  12 Dunlin and three Bar-tailed Godwits were on the Estuary, along with one of the Pintail and a surprise reappearance by the Pink-footed Goose. It was sat on the waters edge with a small gang of Canada Geese just north of Coronation Corner.  Great to see it's still with us, and so pleased to see it in the day light! 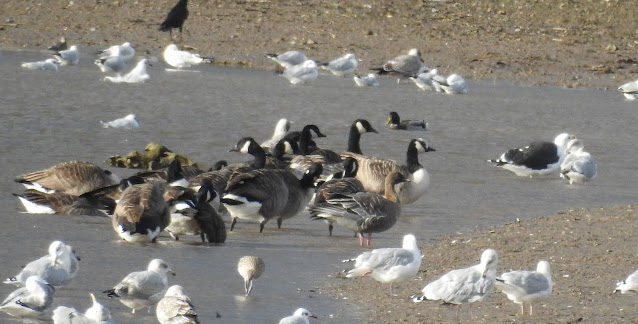 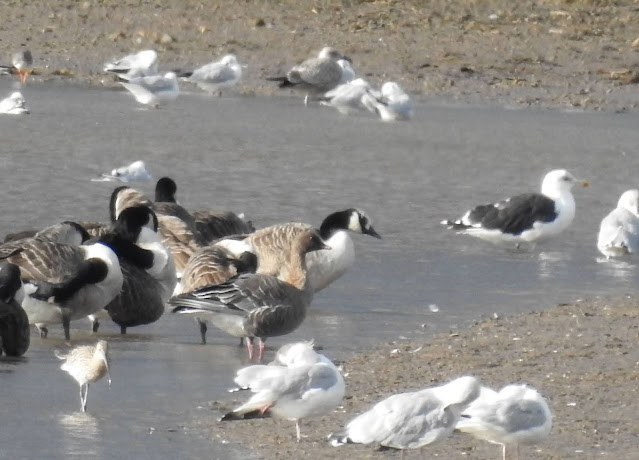 What a great bird!

When we get these odd grey geese or winter swans on the Axe, outside of cold snaps, they usually do one of two things.  They either move on rapidly (sometimes within minutes or by the next morning) or they join up with their local cousins (Canada Geese or Mute Swan) and basically turn into one of them.  For example the Axe's only Greenland White-fronted Goose, although spending just one day here, went on to spend the whole of that winter in Devon with the roving Canada Goose flock.  So seeing as though this bird has been with us for five days now, I'd say there's a good chance it will be staying in the area for a little while longer!