I had drafted another post out to be my next, titled 'Beware of Hackers' (many of you am sure will be able to guess the content of this one!) but something far more exciting has come up...

I put the moth trap out late last night, it was well past sunset when I realised despite the drizzle the conditions were actually pretty moth-friendly with little wind and reasonably mild temperatures. This proved a good move as I was rewarded this morning with a new species for the garden and for me; Radford's Flame Shoulder! 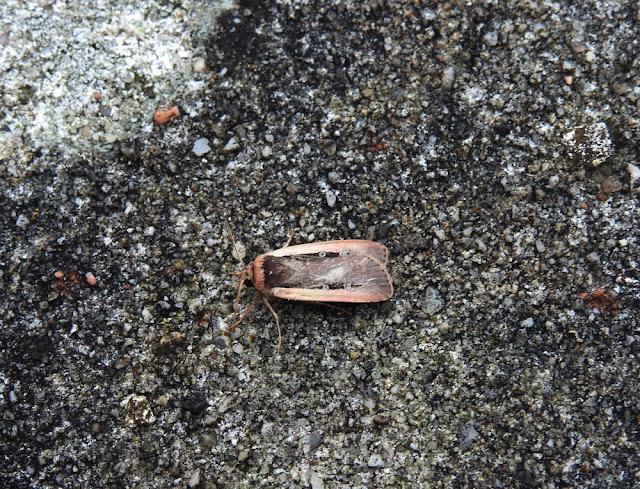 Described as a rare immigrant to the south coast, it's one I have been keeping my eye out for for years.  Any late Flame Shoulder is worth looking closely at as Radford's Flame Shoulder is generally found in the UK after the flight period for Flame Shoulder is over - although am sure some are overlooked during (or at least towards the end of) the Flame Shoulder flight period.  Anyway, when I saw a Flame Shoulder resting at the bottom of my trap this morning I potted it immediately.  After I'd gone through the rest of the trap I came back to it for a closer look, and it was ticking many of the boxes for Radford's.  As it is quite a tricky species to ID I asked for confirmation from the fantastic @MothIDUK on Twitter, and am pleased to say this was rapidly given :-) 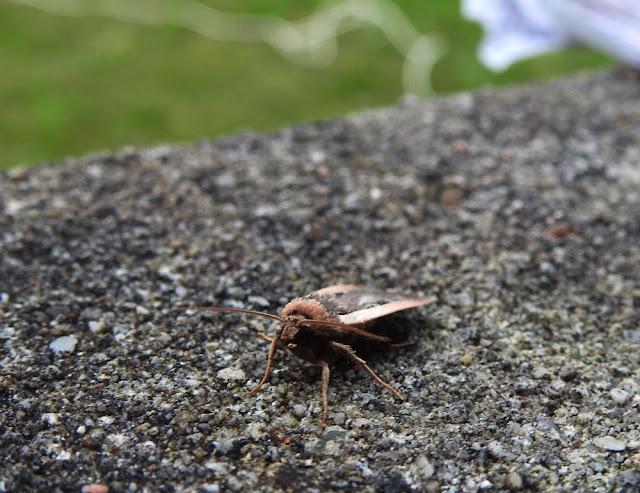 The key ID features I noted were;

I have to be honest and say it didn't look that long-winged to me, but then again I've not seen a Flame Shoulder for maybe three weeks now so a direct comparison may well have given me a different conclusion.

Am ashamed to say the reason why the photos are so poor is because whilst trying to get a photo of its hindwing, I completely fluffed re-potting it and much to my despair it flew off high to a nearby tree! I would have taken far more photos were it not for this :-(

The full catch total ended up at 83 macro moths of 20 species - not at all bad for October.  A single Delicate and L-album Wainscot were the macro sub-highlights, along with fairly late individuals of Cypress Pug, Willow Beauty and Broad-bordered Yellow Underwing.  Lunar Underwings made up the bulk of the catch, with 25 in all.

Seeing as I've not done a moth post for a while, despite the fact I have done quite a bit of mothing, here's a few other moth pics that I've taken over the last few weeks.  I've not caught any other goodies but there are some really smart moths on the wing at this time of year, and here's three of the most vibrant;


I still haven't caught the two big immigrant moths that I'm after (The big Hawk and the one with blue underwings!) but have been getting a steady trickle of Silver Y's along with two Delicates.  Although I mostly steer clear of micros, I have noted plenty of Rusty-dot Pearls and a few Rush Veneers in recent weeks.


This autumn there have been unusually high numbers of L-album Wainscots on the wing.  This is a species I catch every year but normally only in very small numbers.  One morning last week there were six in the trap, and I know several other sites are reporting much higher than usual counts...

I'll end this post with some (real) bird news. Clive did well to turn up a Spotted Crake on Black Hole Marsh late this afternoon, although sadly I couldn't react to the news.  Our fifth in recent years I believe, but seeing as there aren't many in the country this year it's extra good value.  I've not been here for most of today, but did have a nice little surprise whilst filling up with fuel at the Tower Services this morning. It didn't take me long to pin down a sharp sounding crest in the bushes on the edge of the neighbouring chalet park - and as I thought it was my first Firecrest of the autumn. Always a delight.