May hasn't started well for my Patchwork Challenge year list. With the exception of Swift, year ticks have not been coming my way at all. And I have been looking in every corner of my patch I can assure you...

Following on from the my evening sea watch on Friday, a text from Gav shortly after 6am on Saturday got me down the sea front again in record time - he'd had a staggering twelve Pom Skuas heading our way from his vantage point in West Dorset (despite the north east wind!).  I waited and waited, but no Skuas came through our part of Lyme Bay during the couple of hours I was watching. It later transpired this epic flock of Poms flew east through Chesil and past Portland Bill mid morning so they must have U-turned somewhere. All I did see was;


Sunday was mostly another day of work, but I did have a singing male Lesser Whitethroat just north of Coronation Corner mid morning. This was my first decent migrant of the year in a hedge line that in previous years has produced numerous 'scarce' spring migrants - the clear weather that has dominated this spring has not been good for grounding migrants in the valley at all.

Today I had a bit more time out. It was clear that there has been a mass emergence of damselflies, most Large Reds and Common Blue, so I spent a good deal of the mid afternoon looking up hoping for a Hobby or two. I saw plenty of Sparrowhawks (including a pair in full display) and Kestrels, plus a Peregrine, but not the species of falcon I was hoping for.

Later on tonight it was nice to come across eight Wheatear and a female Whinchat on Bridge Marsh, with a decent sized flock of Swallows, Sand Martins and Swifts flying above them. Still no Hobby though. On the Estuary were singles of Ringed Plover, Dunlin, Lapwing and five Whimbrel. And that's where my day ended... 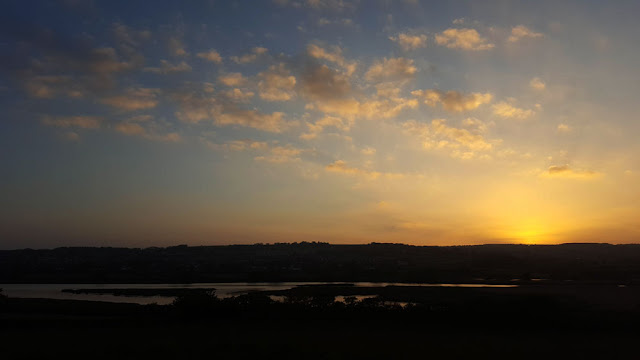