A word you won't read very often on any of the Axe patch birders blogs is the word Undercliff. We tend to pretend it doesn't exist.

Roughly 2/3rds of the coast line of our patch is completely unbirdable. Which is a right royal pain in the butt.  Underneath all our large cliffs is a deep and dense jungle of trees, shrubs and bushes that you can barely get among, and even if you do find yourself on one of the few paths through it, you can basically only see what is right next to you.

East of the Axe it is known as the Undercliff. Below Beer Head and to Branscombe it is called the Underhooken. I call it the Axe Avian Black Hole.


I honestly think this is the reason why there are no Hippolais or rare Sylvia Warblers on the patch list, and could well be why we have only seen one Long-eared Owl in the last 30+ years!  The rarest bird ever seen in any of the Undercliff was the Beer Head Iberian Chiffchaff on 28th April 2007. I was only able to find that because it was right on the upper edge of the Underhooken and was audible and (very briefly!) viewable from the top of Beer Head.

The only scarce species its seem to be good for us for is Ring Ouzel, and that's simply because they are big enough to see from a distance. They can be flipping elusive though and often disappear for hours at a time.

So our Undercliffs are probably fantastic for birds (the amount of Blackcap song from down there in spring is amazing!) but completely pants for birding. This strong easterly wind though has proved hard work to bird in, and seeing as it edged a little more north east this morning, I did what I haven't done for about five years - I went in...


And what a waste of time it was. One Stonechat and one Chiffchaff was the 'highlight' of the mile walk through all this lush and sheltered habitat from Branscombe to Beer Head. It's a bloody hard path too, one minute you are right next to the beach... 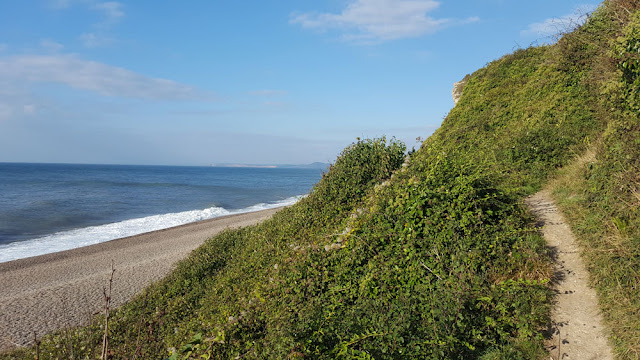 And then you are massively high up... 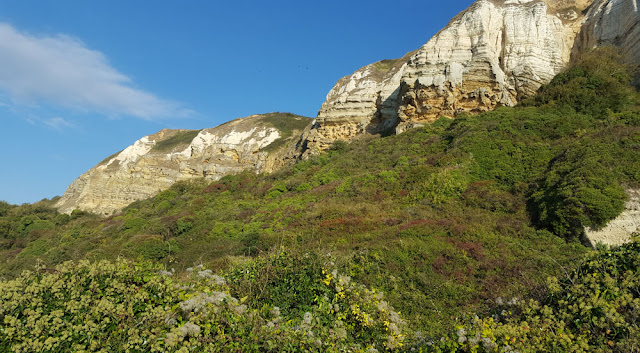 And the amount of these really don't help, they make it so much more painful... 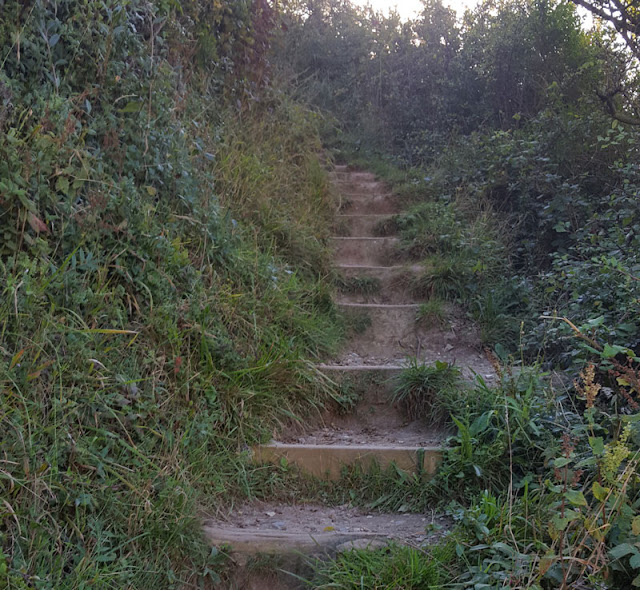 So although I saw nothing today, I'm glad I tried something different this morning. Before I descended into the jungle, the best on top of Beer Head was a moderate visible migration, just Meadow Pipits, alba Wagtails, Swallows, House Martins, Goldfinches and Linnets though.  All were flying east tight against the cliff edge.


In my previous post I predicted my first Redwings weren't far away, and I was right! Unusually they were day time ones too which was nice. I had seven (a flock of five and two singles) fly low east during a short dog walk around where I live yesterday morning. I also noted ten Song Thrush during the same wander so yesterday was clearly something of a thrush day. There had also clearly been an arrival of Chiffchaffs too as I saw a good handful at all the places I visited during the morning. Still no stripey ones though.

I should also mention the lone Barnacle Goose with the Canada Geese on Colyford Marsh on Tuesday afternoon, I found it during a quick pre-work tour of the Estuary.  Although there has been an arrival of 'Barnies' in the north over the last few days, the chances are it was in fact this bird; http://creamteabirding.blogspot.co.uk/2016/08/barnie.html

Right I'm probably going to head out again in a minute. Not sure where I'll be going, although I certainly know where I won't be going...