A Busy But Blustery Beer Head and a Glossy House Tick

Too windy to even contemplate bird ringing this morning (and maybe this week?), but I still thought Beer Head was worth a walk around today despite the crystal clear skies and strong north wind.

The regular haunts on the east side of the head were completely blown out and did appear to be pretty bird-less, but looking over the Underhooken, along to Branscombe and the upper slopes of Branscombe were sheltered enough to show there was quite a lot of passage going on.  I spent almost an hour looking over the Underhooken watching Goldcrests and Chiffchaffs filtering up the cliff edge, then flicking over the top and off inland. Sadly there wasn't anything rarer (or stripier) among them.

Overhead passage was ok, not great numbers (Skylark and Meadow Pipit the most numerous), but there was some nice variety. Best of all being a flock of six Crossbill that flew east, low enough to see a couple of nice red males too. There were the expected Chaffinches, Linnets, Goldfinches and Siskins, along with a single Reed Bunting and two Redpolls. Still a few Swallows and House Martins about, but seemed to be noticeable fewer than just a few days ago.

I've already mentioned the Chiffs and Goldcrests, but it was also a Stonechat day - I had at least 18 in all, which is a great count for Beer Head.  And with them two Wheatear, one of which posed in a nice autumnal way... 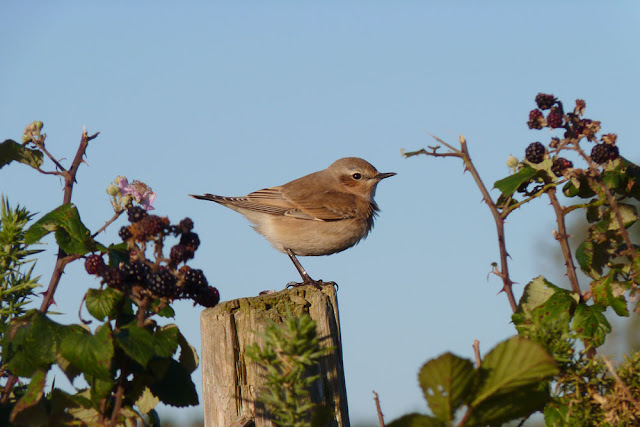 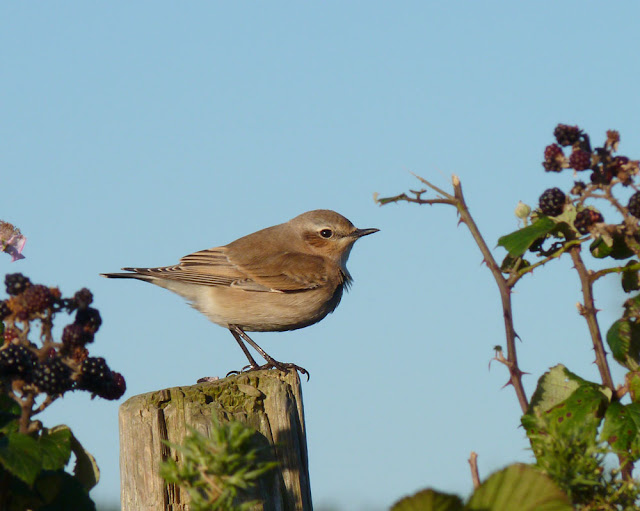 I am still waiting for my first Redwing, but there were noticeably more Blackbirds and Song Thrush about so I don't think it's far away. To complete my list of sightings from this enjoyable two hour wander, three White Wagtails were nice to see as they were my first of the autumn, and a couple of Yellowhammers dropped in (although they could have been local birds)... 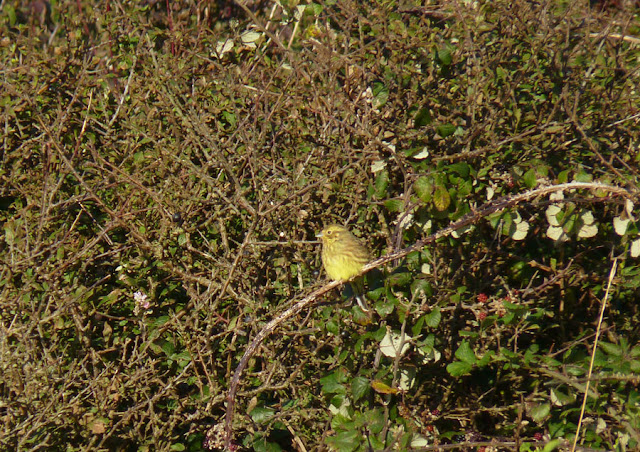 I'm sure you have already read about them on another website/blog/social media platform, but on Saturday as I was driving towards Portland, two Glossy Ibis were flying the opposite way.  They weren't seen from the sea front here (the obvious place to stand when you are told two birds are following the coast west), but it later transpired they were seen circling over Black Hole Marsh at midday, and then feeding on Colyford scrape later in the afternoon.

Thankfully Phil refound them on Sunday afternoon, but I didn't manage to see them, well one of them, until 4pm today.  It was worth the wait though because I saw it from my bedroom window!  To be honest I thought they'd gone as they were last seen at 11am today on Colyford scrape, and I checked that place several times since and saw nowt.  But as I was typing away on my laptop I heard a very low flying helicopter going over, so thought it was worth a punt.... and among a sky full of panicked birds, a lone Glossy Ibis came circling down on to Black Hole Marsh. Result!  This is my fourth patch record of Glossy Ibis, the others being;

As you can see from those records, Glossy Ibis don't usually stay with us very long at all, but these two must have found something they like!
Posted by Steve Waite at 21:14