A Movement of Meds

Last night we just had to go out, it wasn't raining and the sun could actually be seen! Where better to go than Lyme Regis, and we enjoyed a lovely meal in the Bay Restaurant - I thoroughly recommend it!Anyway, the reason I mention it on here is soon after Jess and I arrived, two small flocks of Black-headed Gulls flew close west along the beach. The first had three Med Gulls in it (two adults and a second summer), and the second had two adult Meds in! Soon after this Dad text me to say there were two Med Gulls on Black Hole Marsh, and about an hour and a half or so later, when Jess and I were back in Seaton, three more Med Gulls (an adult and two second summers) flew west past the sea front. We then made a quick visit to Black Hole Marsh where there were two Black-tailed Godwits and a Hobby, Dad's two Med Gulls had gone.This morning I was back down the seafront at 7:30, to see if any more Meds were passing. They weren't - well not the Gulls. Just after 8am a Balearic Shearwater flew east - with a second Shearwater sp. also east about ten minutes later, but this one was too far out to be sure of. Also saw five Common Scoters which landed in the bay, and several Gannets (all flying west).After this I had to carry out my woodland survey, a bit late due to the mostly pants weather we've had! Nice to see lots of young birds about, and Marsh Tits are always good to see as they can hardly be described as a common bird on patch... 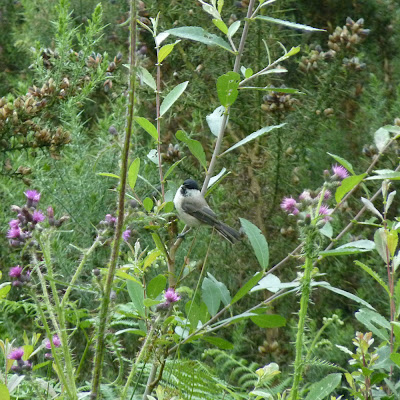 A Willow Tit would have been something else though!
And this Rabbit did make me chuckle. One greedy bunny... 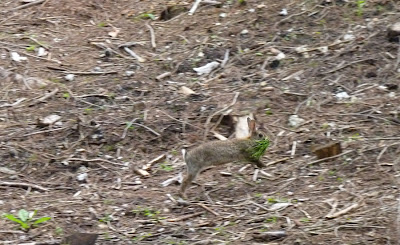 Or I suppose it could be lining for a burrow?
I had a moth trap out last night - which gave me exactly 100 moths this morning. Just one immigrant, a Silver Y, but there were several new species for the year for me, including; Buff Arches, Eyed Hawkmoth, Green Arches, Clouded Brindle, Clay, Common/Lesser Rustic, Sycamore and Fanfoot. The numbers came from Heart and Dart (37) and Dark Arches (11). 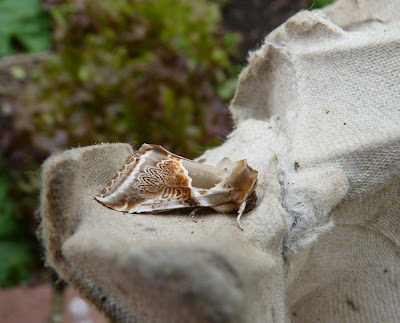 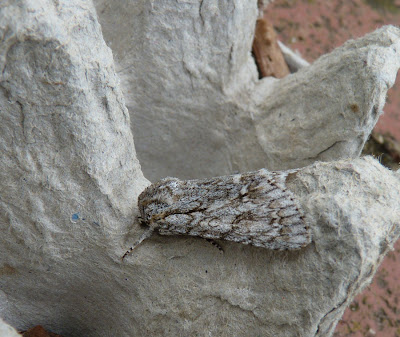 Sycamore
Posted by Steve Waite at 11:36