Half way through my shift at work today, a text came through from Bun, he had found an invisible but noisy Turtle Dove in Beer, it was about half past 12. This is a species I have somehow avoided since moving here in 1991! Yes - I have never seen one on patch, Bun has seen about nine!So, thinking there was no chance at all it would stay put for over four hours I had already written this one off. But Bun very kindly returned to Beer just before I was due to finish work - and he heard it again. Yipeee! Still no one had actually seen it though!So, just after 16:30, I hot footed it over to Beer, but moments before I arrived, a couple of Crows flew in to the area the Turtle Dove had been purring from, and out flew three Wood Pigeons and the bird I wanted! Bun thought I had blown it yet again...

Thankfully though, it flew only a short distance, and landed in a large ash tree - and then I turned up :-) 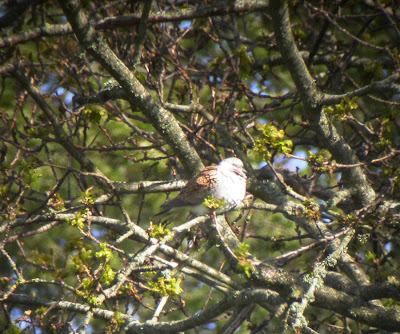 An over exposed patch tick!
It remained here for about ten minutes, when two Wood Pigeons flew in and flushed it. It flew off strongly east. This is the second patch tick Bun has found me this year - I certainly owe you a beer or two mate :-)
Posted by Steve Waite at 18:17