I'm sure many of you are wondering why the Axe Estuary has been so quiet lately? No news of any decent gulls, or anything else for that matter! Well that's because it has been quiet! I've been out for at least a couple of hours every day, but I've seen almost nothing worthy of note.Yesterday I trekked out to Weston again, and finally had good views of the Scoter flock. There were just under 200 birds, but unfortunately all were Commons. 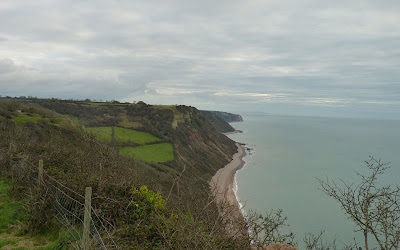 Weston Cliffs; the furthest point is Beer Head
The gulls have been relentlessly crap. Whilst Radipole have had up to three Ring-billeds, an Iceland and a Caspian within the last few days - not to mention 350+ Med Gull - the Axe yesterday had six Med Gulls (4 unringed adults, 1st winter and 2nd winter) and that dark mantled hybrid third-winter large Gull that I photographed the other day. And that was it! Today was even worse, with just three Meds.
With some cold weather predicted, let's hope it shakes something up!
Posted by Steve Waite at 14:59