Well we are back - and am pleased to report that we haven't missed much on patch! I'm even more pleased to report that we had an excellent time in Scotland - plenty of birds, plenty of sunshine, plenty of laughter and plenty of stunning scenery.
Bun and I picked up Karen at 21:30 on Saturday, and just after 23:00 were in Bristol where we met Nick Page. We loaded our stuff into his car (a Vauxhall Corsa!!) and continued driving north. Due to the size of our transport, I didn't take my telescope - so almost all of my photos were taken hand held with my Panasonic Lumix.
Sunday 10th April - Day One
We arrived at our first site at about 04:50. This site was well south of the Cairngorm National Park, so we decided to use it to break the journey up a little. The plan was to have an hour's kip before it got light, but I stepped out of the car to have a pee and that all changed...
In the pitch black, Curlew, Lapwing, Red-legged and Grey Partridge and Red Grouse were calling, with Snipe drumming over our heads... then I could pick out the distant sound of Black Grouse lekking - we had struck gold!!! Just standing by the road in the dark listening to all these sounds was magic, and an incredible way to start our trip.

As it began to get a little lighter, we drove on a little further and could see in the murk the shapes of male Black Grouse beside the road, with the white of their tails already standing out. As it got lighter we could soon see nine male and three female Black Grouse going at it - what an experience... 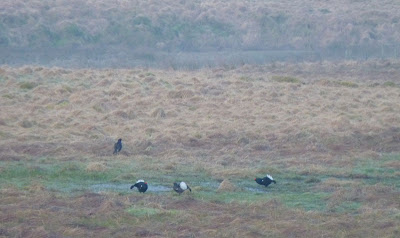 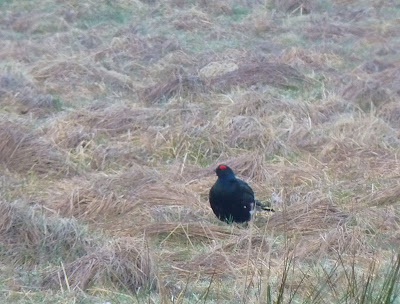 And here's a little video...

If this wasn't enough already, a Short-eared Owl appeared and began displaying over the valley, several skeins of Pink-feet flew over north and we saw another three male Black Grouse a little further east along the road. 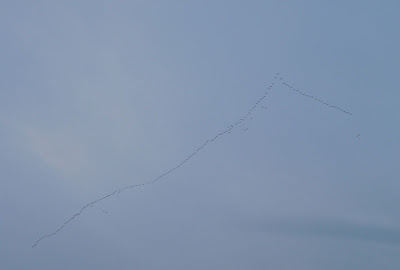 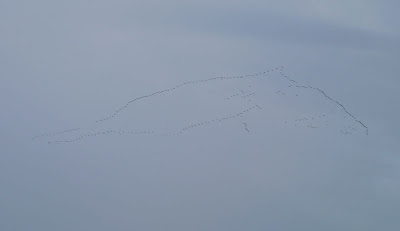 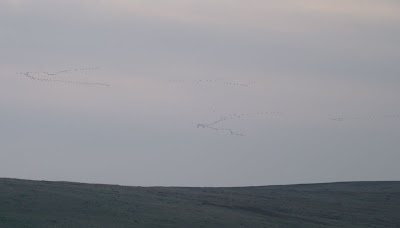 We saw many thousand Pinkfeet in about five skeins
And another little video...

We headed on from here and continued on with our journey. The further north we drove, the more regular Oystercatchers and Curlew became - especially the former, they are all over the place! On the road side verges, on roundabouts - everywhere!

With this day being the day with the lightest wind forecasted, we decided to head straight up to the Cairngorms. Although we did stop at a few places en-route, including a cafe where the bacon in our rolls contained more salt than the salt pots on the table did - yuk!

We also called in at Loch Morlich on the way to the top, here a migrant Greenshank flew around calling, but there was little else on the loch... 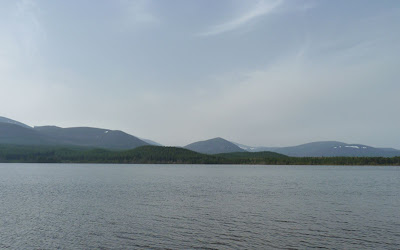 Loch Morlich
We arrived at the car park at the foot of the Cairngorm funicular railway... having been awake for about 26 hours already we decided against walking up and took the railway...

Little did we know, this was the last day of skiing up here, and the weather was absolutely glorious - I swear it was WARM on the very top of the Cairngorms... all I was wearing was a t-shirt and a light fleece and was too hot!!!

Anyway, the weather and the fact it was the end of the season up here meant there were HUNDREDS of skiers - and most of the team weren't confident about seeing Ptarmigan at all. Persistence paid off though, as after about twenty minutes of scanning two of these 'mountain Grouse' were located on the slopes above the Ptarmigan Restaurant. They were just beside the only path which goes up the mountain from base camp - which was rather lucky! 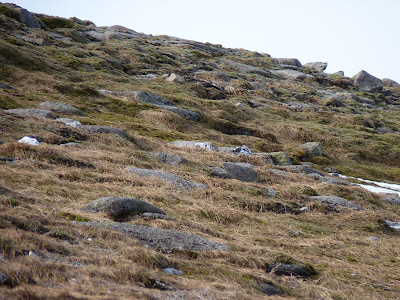 There's one in this pic, can you see it? 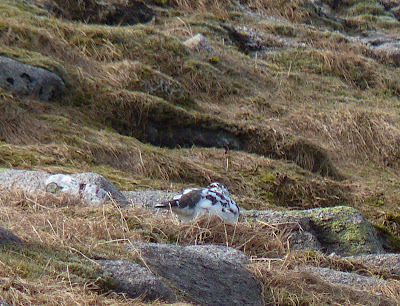 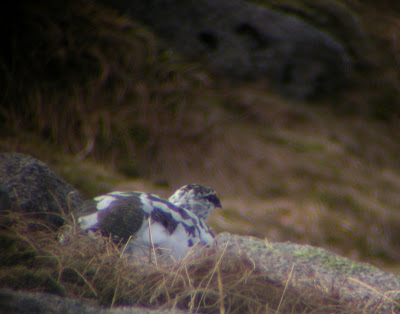 A bit clearer - the lower shot was taken with my Nikon through Bun's scope
The view was stunning, and although it never looks anywhere near as spectacular through photos, I'm still going to post several of them... 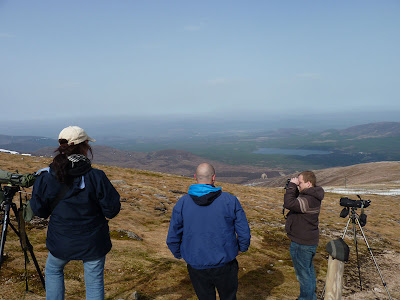 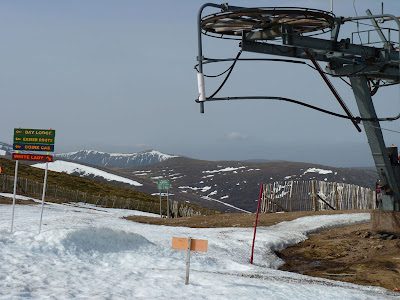 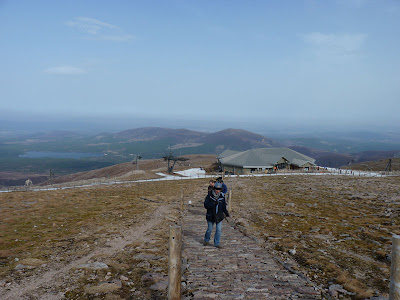 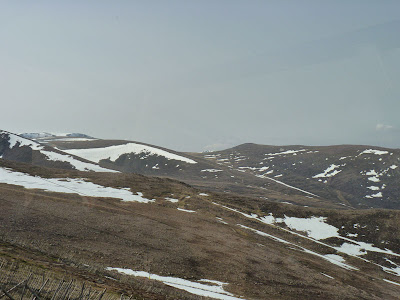 In the top photo; Karen Bun and Nick
It was time to head back down, so we got back on the 'train' to head down...

With the lack of wind, we then headed to Curr Woods hoping for some Crossbills. There wasn't much here at all really - although it was soon clear just how bloody common Chaffinches are up here - and how different they sound to the Chaffinches 'down south!'. A singing Tree Pipit was nice - I was surprised to see one here already.

After much patience, we did hear some Parrot Crossbills in the distance - but didn't see them at all.

We tried viewing the same woods from another vantage point - and from here could see a couple of Crossbills sat up in some larch trees. There were just too distant to do anything with though. We did see our first Red Squirrel here - and see it well we did... 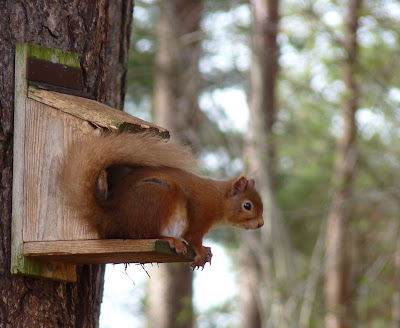 Nice!!
We were all feeling really tired, but couldn't resist a drive down the Findhorn Valley, which was very near to our accommodation in Tomatin. The Findhorn Valley is one of my favourite places on this planet... 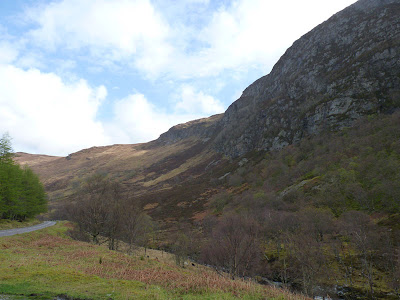 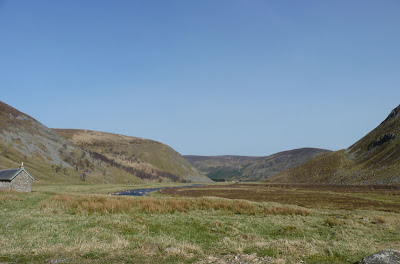 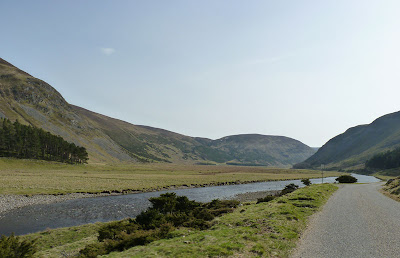 Just stunning!
We could see plenty of Red Deer up on the hill tops, but few birds. The team's weariness was starting to show now... 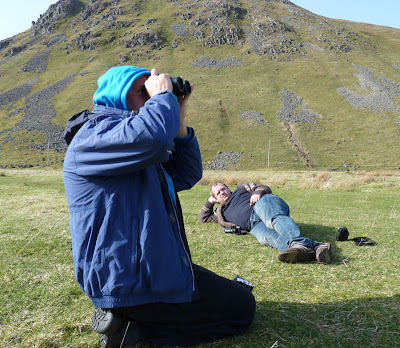 Still keen though!!
We then spent the next half hour trying to find somewhere to eat - which is harder than it sounds! We finally found a place in Aviemore - and can honestly say we will never be going back to it again!!! To be fair though the pizza's weren't all that bad.

Over dinner we were practically falling asleep, so went on to our Guest House to crash out... 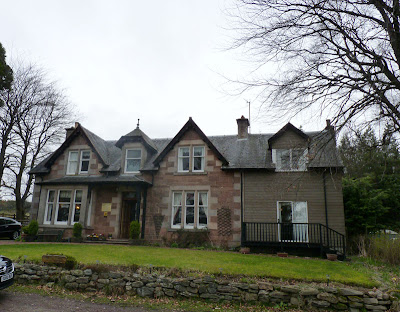 This proved an excellent choice of accommodation
Check back to this blog over the next few days for the rest of the trip's action....
Posted by Steve Waite at 17:16