A Surprise Or Two From The Deep...

Hi folks, looks like I've been tempted into blog land too! I was planning to write the first post about me and my life history, but this morning I saw these off Seaton Seafront.....


I've seen Bottle-nosed Dolphins off this part of the coast only about four times, with my last sighting being a couple of years ago when two drifted past Branscombe one morning. Have seen Common Dolphins here only once. This small pod (about seven, including two babes!) were in the bay for at least 40 minutes, always heading west. At one point their mood really changed and they started charging at full speed even further into the bay (coming as close as the nearest black and yellow flag!). It was during this charge that several of the animals performed full leaps out of the water, simply amazing!

Also on the beach a nice flock of nine Sanderling (quite a good count for here) and a couple of Ringed Plovers. Also lots of House Martins on the move over the sea.

And todays lesson for this inexperienced blogger, don't post until the close of play! Mid afternoon, sat at the gateway just north of Axmouth (known locally as the 'farm gate' - original!), I struck lucky when a gorgeous dark phased juv Honey Buzzard appeared over head. It circled around just to the west of me, before gliding VERY rapidly south. I phoned all the local birders but nearly all were in the wrong place. It's about time we had one, I for one have been looking skyward in anticipation for a week, but up until today - not a sniff! It's one for the car list too, I first spied it whilst leaning out my passenger side window! As I said, a cracking plumaged bird, as dark as they get!

Other birds I picked up this afternoon include the six Little Stints, three Ruff and Bar-tailed Godwit on Colyford Scrape along with 20+ Dunlin and 35 Black-tailed Godwits. On the estuary a second-winter Med Gull was north of Coronation Corner, along with the Osprey still. 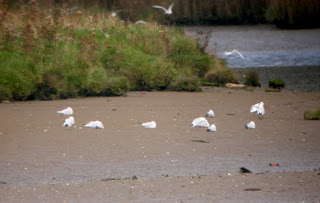 Can you spot the Med?? By the way, incase any blog readers didn't already know it I LOVE Gulls!