Sometimes success can be even sweeter if you re-visit past pain.  So to do that, here's a post I wrote on the old Devon Bird News blog nine years ago...

If you can't read it here's a direct link to the post; https://devonbirdnews.blogspot.com/2011/06/rose-coloured-starling-colyford.html?m=1

On 9th June 2011 the local birding community found out about a stunning adult Rose-coloured Starling that had been flaunting itself around Colyford for several days. Unfortunately it was last seen on the 8th.  If I remember correctly it was then seen in mid Devon, before winding up on the Otter Estuary in July.  A completely gripping event, can remember the pain even now.

Every year since we've hoped for redemption.  Obviously a summer adult would be most appreciated, and during influx years we've put the effort in, but even an autumn juvenile would suffice to plug the gaping gap on all our Axe lists.  Not a whiff.

And that makes today a very good day indeed.

With the current Rose-coloured Starling influx picking up pace, a couple of days ago I posted this on Facebook. Well us birders can't find one for love nor money, so I thought I'd see if the local non-birding community could do better.. 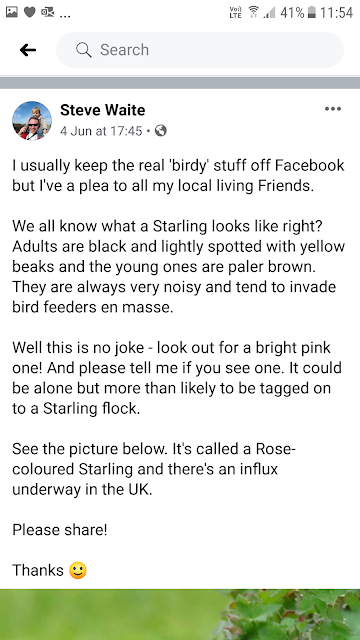 It clearly wasn't shared enough.  This morning Kev phoned with news a friend had tagged him in the following post...

Soon after we gleaned the exact location we descended. Phil managed to see it perched up but it didn't hang around, Kev and I only managed brief flight views.  I (with Jess and Harry in the car - Jess was just as keen as I to track it down!) followed it in flight across half the town before it seemed to head off west.  We thought that was it, but a few birders sat it out and almost three hours later news came through it was back in the same spot.

We jumped in the car and ten minutes later were treated to this...


Turn the volume up for some singing Rose-coloured Starling action...

A singing male Rose-coloured Starling - amazing!  But even more amazing than that, it soon became apparent there were two with a duller bird also present. I managed to drop in briefly later in the afternoon, and didn't even have to get out the car as this was sat on the roof next to me...


The singing male can only be described as being ridiculously flamboyant.  Black, pink and full of punk.  This bird however had paler and dirty looking pink bits, pale tips and edging to most the darker feathers, a dark-tipped bill and just a bit of a shaggy head lacking the large plumes.  We have a male and a female then... they couldn't could they?

A further twist today (which could have been very unpleasant had today not have happened!) came when I found out that there was also a Rose-coloured Starling in a private garden in Colyton nine days ago.  "A baby Magpie that was bright pink and black with a crest" is pretty conclusive for me!  No pics sadly so we can't compare.

Rose-coloured Starling is remarkably my third patch tick of the year, with American Herring Gull in February and the Blyth's Reed Warbler (both patch firsts).  Before 2020 I had suffered three blank years for new birds here, with my last addition being the Beer Head Red-backed Shrike in September 2016 (a month after Least Sand).  Have said it before and it will be said again, a funny old game this birding. Completely unpredictable.

Before signing off I must just mention Crossbills. I had one fly very low west over Seaton early afternoon yesterday  (unfortunately not from my house!) with several more today calling from the Morganhayes Wood area.  They've clearly had a good year, with lots of Siskin around too.

What a day.  A ridiculously pink one.  Take care all.