Moor Than Meets The Eye

Roll back to 2016, and I spent much of the summer walking across East Dartmoor with Chris Townend and Paul Kemp. The aim was to survey every kilometre of East Dartmoor Moorland, twice, between mid April and mid August. This was for a project devised by RSPB and Moor Than Meets The Eye.

It was exceedingly hard work and extremely tiring. Each 1km square had four 1km transect lines within it, and we'd try and do four or five squares per morning - that's a lot of walking!  To get the squares done we'd start at dawn and often skimp on coffee stops. And because we were walking along set transect lines and not footpaths, walls, fences, bogs, gorse, angry cattle, etc, were frequently in our way.  But my god was it all worthwhile...

Virtually every single survey gave us at least one reward. Whether it was a bird or other wildlife sighting, or quite simply a view, there was pretty much always something. I found it really interesting and enjoyable to learn so much more about Dartmoor than what I knew beforehand, and getting the chance to visit so many places that I'd never been to before.

Some of my most memorable wildlife highlights from these surveys include seeing a Dartmoor born and bred young Curlew (a true rarity), a couple of herds of Red Deer and my best ever views of Grasshopper Warblers (we recorded so many of these!). It was just so nice though to be surrounded by birds I don't see day in day out on the Axe, with breeding (and frequently drumming) Snipe, Whinchats, Tree Pipits, Redpolls and Redstarts aplenty, along with a few Ring Ouzels and almost daily Cuckoos. Regarding the last species, I can still picture the three male Cuckoos flying around over my head chasing a 'bubbling' female. Amazing stuff, and quite frankly some really weird noises too. Thanks again Chris and Paul, and the team at RSPB and MTMTE for making this happen.

So why have I written this blog now? Well a few days ago this dropped on to my doormat... 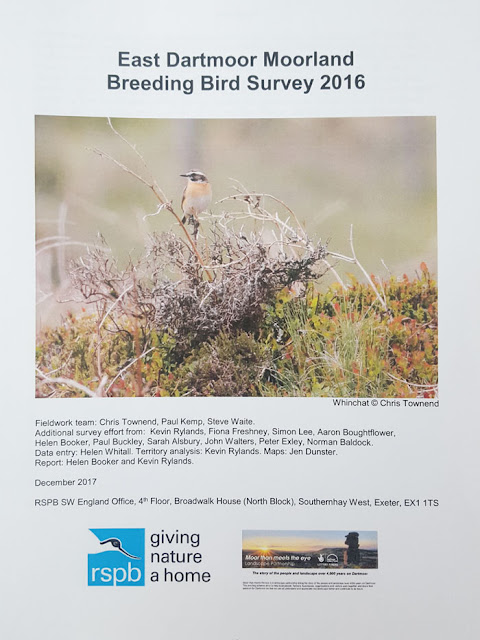 Yes the final report is out, and it's fab. From cover to cover this report is full of top quality raw data, which is compared with data collected back in 1979. This reveals some very interesting results, plenty of decreases which sadly is to be expected but some surprising increases too.  Crucially, the strict methodology used to collect the data in 2016 ensures it can be easily replicated in future years and comparisons easily made.

If you want to have a browse of this report, you'll find it on the Moor Than Meets The Eye website HERE.

If these surveys are done again at some point in the future, would I conduct them again if asked?  You bet I would - with absolute pleasure. What a privilege this whole project was and I'd do it again in a heartbeat.