I've done quite well today considering I've only had an hour out tops, in two parts, mid morning and late afternoon.

This morning on Beer Beach, a male Black Redstart popped up in front of me, which was presumably the recent Seaton Hole stunner I thought...

But then I saw it from the side...


Yes it was a first-winter male, which means we have definitely got at least four Black Redstarts wintering with us this year. The adult male has been at Seaton Hole almost daily, and on Saturday females were along side him, and in the middle of Seaton Town.  Chances are there's more than four, but at least we have an 'at least' figure. Today's bird was clearly not the first-winter male I had along Trevelyan Road (Seaton) on 16/11/17 as that one was already showing decent pale wing patches. Because of the date, that bird could easily have been a passing autumn migrant so I've not included it in the over-wintering total.

This evening there weren't many gulls along the Estuary to go through, but there was a single adult Med Gull. Was interesting to see it had already lost its winter mask, showing the first signs of a hood...

All the Wigeon were on the sea this evening, about 250, due to shooting in the valley. Among them were a few Teal, and surprisingly a female Pintail, our first of the year...


On Saturday, two days after 'Twilight Tim' had four Hawfinch at Colyton Church, as I was walking through Colyton with the dog, having seen no Hawfinches at the Church, I was amazed to watch a flock of nine fly in, land on a tree (which is marked with a red dot on the map below), then twenty seconds later fly off back west with a single Greenfinch... 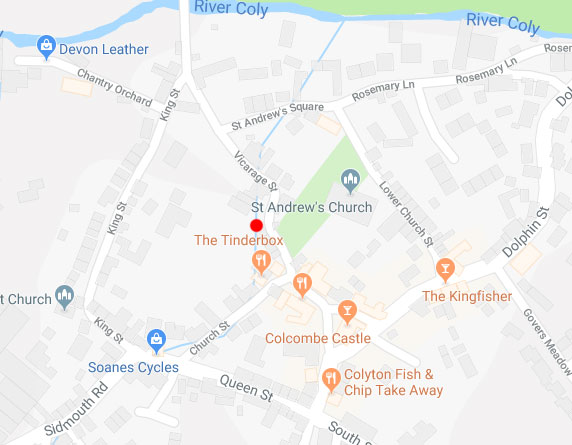 If only flocks of Hawfinches dropped out the sky like this every winter!