Before I go on I feel I should clarify my use of the word 'autumn'. No I'm not wishing summer away - well actually I kind of always do but that's not the point - I mean 'autumn' as in the autumn passage of birds.  Autumn passage, which spans from June to November/December is the post-breeding passage, whether it's a bird that's failed to breed, has bred or is a juvenile. With gulls and waders, and even some passerines, it can start as early as mid June.

Although this blog continues to remain quiet, it is a seasonal quietness not a baby-related quietness. See I still get down the marshes... 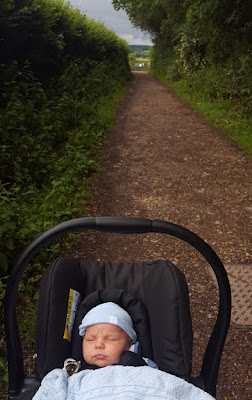 Actually Harry really is turning out to be an outdoor-loving baby.  Most crying fits can be solved by a wander outside, which is pretty handy for me... unless it is in the middle of the night then it really isn't!

I noted the first passerine migrants back on the 22nd June when 11 Sand Martins flew purposely south west in two groups over the Estuary, and a Willow Warbler sub-songed from Stafford Marsh.

With the waders, we've had Lapwing, Redshank and Curlew all summer (although sadly none of them breeding) but numbers of these are building up a bit now. There's roughly twenty Redshank about, Curlew numbered 26 last week and I've just seen twelve Lapwing. The first Common Sandpiper was on the Estuary on 22nd June, and the day before yesterday I noticed the first on Black Hole Marsh for the autumn - with three there yesterday. I'm amazed I've not seen a Green Sandpiper yet, but I reckon there will be one or two out there on the pools around Colyford Marsh we just can't see them.  Little Ringed Plover will also arrive within the next few days I reckon.

Among the gulls, and the increasing number of Black-headed Gulls, on Wednesday I was pleased to see the first Med Gull of the autumn on the Axe - an absolutely stunning summer plumaged adult. We usually get our best numbers of Med Gulls in the mid to late summer period, although most pass over the sea and don't even give our Estuary a look in. Also on Wednesday the first two juvenile Black-headed Gulls were present, hopefully they've had a good breeding season, as hopefully have Yellow-legged Gulls too because as ever I'd love to see lots of those clean and crisp juveniles.

Starlings seemed to have had a bumper breeding season, there were about 350+ on the wires on Colyford Common yesterday. That's more than enough to attract a(nother) pink one surely!  I'm a little worried about our local breeding Barn Owls mind, as at 11am the other day I tracked one and watched it hunt over Black Hole, Stafford, Colyford and Bridge Marsh, Colyford Common, and then the field just by Boshill Cross before it finally caught something.  That's a lot of effort for one small meal. The three Crows chasing it back wouldn't have helped either, and this is why it flew inside the Island Hide to get some shelter. I know Barn Owls use this hide at night, but have never seen one fly into it during the day! Really wish I was sat in there. It did the trick though as the Crows didn't follow it in.

And that brings me and Axe Birding back up to date. As soon as we get into July migration usually steps up a gear or two, so hopefully that will mean more blog posts. Hope all you lovely readers are well and thanks as always for sticking with me.