In the last blog post I spoke about the two bird highlights of last week, but I didn't have chance to blog about everything else! So here it is...

A week ago today saw my (now seemingly annual) guided bird watch around Beer Head for the East Devon branch of Devon Birds.  It was one of those days weather-wise that you didn't know what to wear, in some spots it was quite warm and still, but grey clouds overhead always suggested rain was imminent. On a couple of occasions it was more than imminent...

There weren't loads of migrants around, but there were some.  The bushes held a couple of Whitethroat, and Blackcap, a Redstart (only seen by a couple of people) and several Chiffchaffs. On top of the headland at least five Wheatears and a Whinchat were nice to see, and the flock of 20+ Yellow Wagtails around the cattle proved very popular. Had great views of a juv Green Woodpecker too, feeding in the middle of the field - this was probably my highlight of the walk as we don't see many around here.

The next day was Caspian Gull day - but a morning seawatch showed my first Red-throated Diver of the autumn west which is certainly worth this paragraph I'd say!

Next it was Wednesday, which was Spotted Crake day! Thursday dawned and I was hoping to make it three year ticks in three days - although I had to be in Exeter for 9:30 which made that rather unlikely...

I was in Exeter to record a piece for BBC Radio Devon about the recent Lesser Yellowlegs.  Unfortunately we didn't see it as it was further down river, but I enjoyed doing it never-the-less. I think it is still on 'Listen again'. If you really want to hear it, you want Good Morning Devon on Friday 20th, and go to 23 minutes. Clips of the interview even made the half-hourly news and the whole piece was repeated towards the end of the show too!  Anyway, the actual interview was all done and dusted by 11am, so I came straight back home...

The weather  became really interesting, fairly strong southerly winds and heavy rain, and as soon as the rain stopped I headed to the sea front. I'm very pleased I did as I did indeed make it three patch year ticks in three days!  Arctic Tern was the species, there were three (two ads, one juv) lingering close in, with another two juvs west past.  After I'd seen the first three Arctic Terns, and had my first Balearic Shearwater of the watch, I sent a few texts out and was soon joined by Gav. I watched 12:40-13:50 and mustered the following (all west except the three lingering Arctic Terns):

Although this doesn't sound much, as we've had virtually no good seawatching this year it seemed like a bloody good seawatch! Turnstone and Arctic Tern are fairly scarce here, and Balearic's are always nice to see, Gav stayed on a bit longer and had a few more of these. Our passage of Balearic's tied in nicely with a passage off Portland that also occurred when the rain stopped, see HERE and scroll down to the 19th.

Friday came next and I fancied a walk around the marshes early morning. All was quiet until I spied an Osprey circling way down river. It disappeared around the corner towards Axe Cliff, but five minutes later  reappeared, flew all the way up river before U-turning over Black Hole Marsh and flying off south... 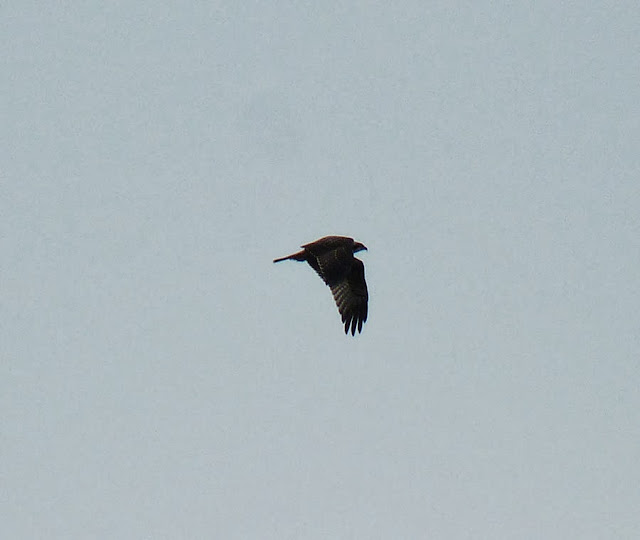 I returned home for a day of laptop work, but this was interupted by a phone call from Doug Rudge (of EDDC). Someone had phoned them with news of a dead Peregrine in Axmouth.  Soon as I heard Peregrine and dead together I knew I had to get this bird in case it was dead via sinister/illegal means.  Many thanks to the owners of Axmouth Camp Site for keeping the bird (in the freezer too!) and reporting it.  Everyone please do this when it comes to dead birds of prey.

Anyway I picked it up and although always sad to see a dead bird, I was pleased it wasn't a Peregrine. It was actually (very surprisingly!) a juv Merlin... 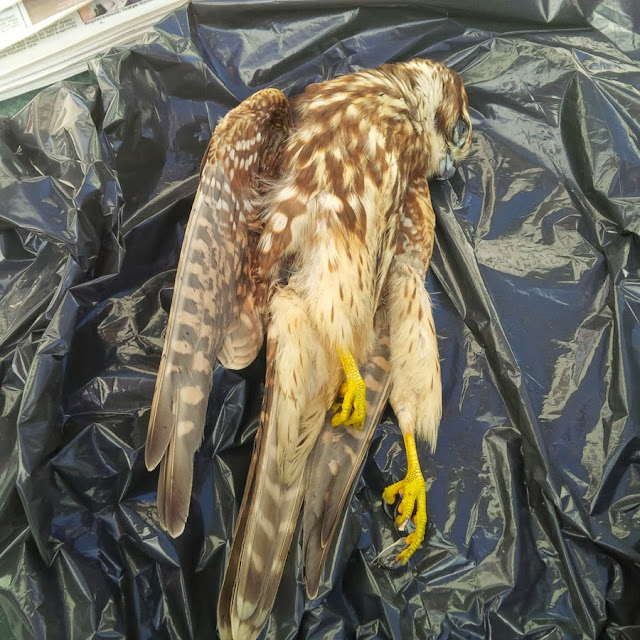 A Merlin was reported from the Axe Wetlands several times last weekend, and the camp site owner said he'd seen this bird several times during the week. It was very thin so obviously couldn't catch itself any prey - maybe it left home too soon?


This morning, a look around the reserves at high tide pleasingly showed an increase in wader numbers.  Best of all were two juv Curlew Sands on Colyford Marsh with 22 Dunlin and 15 Lapwing. On Black Hole Marsh it was nice to see Redshank and Blackwits roosting again, with nine Green Sands showing there is at least some food in the mud here!

And that's me caught up. Lastly, if you're not looking forward to something coming up, just think what this Wheatear is about to do...