I couldn't sleep last night, the heat didn't help, but there was another reason... I was too busy listening to birds!

It's weird, during the day I don't hear any water birds from the house, but after dark I can hear so much from Black Hole Marsh. Last night I added Greenshank to the house list thanks to a very vocal bird interrupting the almost constant calls of Redshank. The odd Curlew and Oystercather called, and lots of Black-headed Gulls - this surprised me as I just presumed that during the summer they roost on the sea like they do in the winter. I even heard the wing beats of a Mute Swan (or two) fly past!

After hearing all this bird life at Black Hole Marsh, at 8am this morning I headed down there for a look, and I was impressed with what I saw.  Sadly the 230 Black-headed Gulls didn't include any goodies, although it did include nine juveniles though - weird looking things that they are!  There was a nice mix of waders on the marsh with Common Sandpiper being the most numerous (eight), along with a single Green Sandpiper. There were two each of Black-tailed Godwit and Lapwing, and a single Greenshank was in the corner by the Tower Hide.  Two Teal were my first of the 'autumn' - although I was cursing them for not being Garganey! I also saw my first juv Kingfisher of the year and a small number of Sand Martins overhead included some juvs. I'll be keeping my eye on this place from now, I really do fancy a nice Terek Sand!

I've been annoyed for much of today that I hadn't put my moth trap out last night, so I cheered myself up by looking at some other insects. Lower Bruckland Ponds is always the best place to go around here for some Odonata action!

It was really good to see lots and lots on the wing. Common Blue, Azure and Blue-tailed Damselflies were everywhere (no Red-eyed of either variety though), with Emperors patrolling most parts of the lakes. Saw my first Beautiful Demoiselle of the year too.  Photography was hard as nothing was staying still for long, although I did have chance to snap this Four-spotted Chaser... 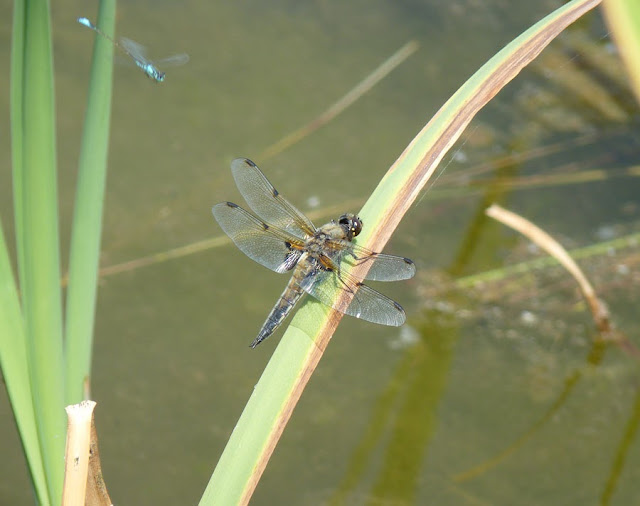 And here's one of the many male Black-tailed Skimmers... 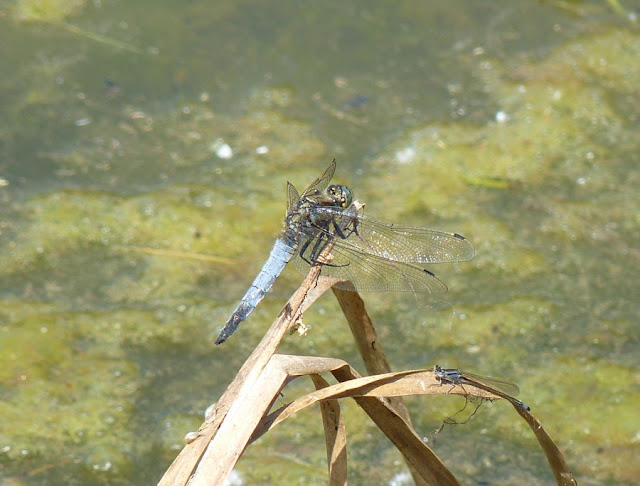 I was hoping for a nice Red-veined Darter, a species which have bred here, or better still another Lesser Emperor! No such luck though, not today anyway.

There were a few more ducks here than of late, in fact probably the most I've seen here all year. And amongst the moulting Mallards I was surprised to see two Shoveler...

It was also pleased to confirm Little Grebes have bred here again. although I could only see one juv.

Right that's enough for now, I am over heating here in my office. Hopefully I'll have a moth trap out tonight, that's if I've not passed out from sun stroke by then! It really is hot!