Another Day On Patch

A seawatch this morning commencing at 09:00 from Spot On Kiosk on Seaton Seafront gave a highlight I wasn't expecting! It didn't take long for a distant and rather elusive Grebe to show itself as our first Red-necked Grebe for a couple of years. It was hard to pick out, and even harder to stay on as it showed for no more than a second at a time! It eventually came closer though and became much easier to see as the sea calmed down, in the end we actually had good views of it. 'Jam of the Day' goes to Phil, who turned up to see it moments before it took off and flew west! Other birds I saw included my first Great Northern Diver of the autumn, five Balearic Shearwaters, three Arctic Skuas, several Kittiwakes and Common Scoters and one Common Tern past.
Later on in the day Ian McLean turned up our third Grey Phalarope of the year, this one being the first twitchable one though as it spent the afternoon feeding on Colyford Scrape. I paid it a visit mid afternoon, also eight Dunlin and a Ruff here. 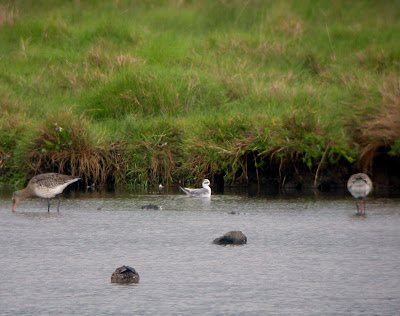 A little gem, just a little too far away!

And here's a short video clip, nice to see it actually walking! This is the second Grey Phal I've seen on this bit of water, the previous one was actually the first time I'd ever seen this species - or any species of Phalarope in fact!

The Cattle Egret is still on patch, it was with the cattle north of Seaton Marshes this afternoon. A look along the estuary revealed the Great Crested Grebe still, a Common Gull and a dark mantled Lesser Black-backed Gull.
Posted by Steve Waite at 18:27